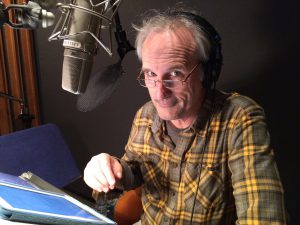 When Golden Voice Narrator John Lee agreed to hop onto Goodreads for a narrator interview, we couldn’t believe our luck! John Lee is famous for his resonant voice, thoughtful characterizations, range, and stamina. He’s won awards for everything from serious history books to mysteries to Ken Follett’s sprawling novels. He has had many titles reviewed by AudioFile reviewers over the years, including the Earphones Award Winner Sweetland. Read a selection of our readers’ questions and John’s thoughtful answers below.

Q: I adored your performance of Georgina Harding’s The Solitude of Thomas Cave: A Novel, which takes place mostly in the Arctic winter. How did the situational details affect you while you were narrating?

John Lee: Some books excel at what I call mood. The Solitude of Thomas Cave seemed to have a sort of mournful music under the whole thing. It’s not quite the same as having an imagined soundtrack, it’s more like that unidentifiable hum you hear sometimes which catches your attention and you can never quite figure out where it’s coming from. That tone informs the whole reading and a book such as this requires a poetic approach or perhaps it might better be described as a musical approach: my tone needs to match what feels like the tone of the book. I certainly ended recording sessions on Thomas Cave with a sense that I was emerging from another world. It was very immersive.

Q: You are the historical fiction king—in my (audio)book. How do you decide if you’ll use an accent for characters or the narrative text? How do you prepare for speaking in an accent?

John Lee: The decision to use accents is always a tricky one. I just did a book about a historical Irish character and it was clear that both the narration and the characters needed to be in an Irish accent. Yet, if I am doing something like the Ken Follett’s The Century Trilogy there are dozens of accents and the narration needs to be in my voice simply to distinguish it from the Welsh and the German and the Boston ones. I prepare for doing accents mostly by trying to call up the voices of people who speak that way. It’s partly a visual recall of the people and partly a sort of recording I have in my head of their way of speaking.

Q:  Can you tell us how you engage emotionally with your characters and how you manage tension and pacing?

John Lee:  Pace is the heart of the matter. There are two basic schools of thought—one that the ear or brain takes in information at a certain speed, and that speed is quicker than you might think. The other is that a book is different from pure information and needs to be read a little slower. Because English people tend to speak more quickly than Americans, directors are always asking me to slow down. Speed, though, helps raise tension in the right places. And tension is that indefinable middle ground where the silence and the speed are just right. Engaging emotionally is a matter of basic acting. I am a creature of the theatre and came to audiobooks from a world where you know if you’ve paced yourself and held the tension well simply by sensing the audience’s reaction. I think of audiobooks as my personal theater space.

Jump over to John Lee’s narrator page for more of the interview, and come join the conversation in the Audiobooks group on Goodreads so you can take part in our next narrator Q&A!

Hear John Lee’s performances of The Century Trilogy that includes FALL OF GIANTS, WINTER OF THE WORLD, EDGE OF ETERNITY.

The Download: In Conversation with James Patterson and Edoardo Ballerini
AudioFile Editors | 08.09.17
Our team here at AudioFile Magazine is excited to introduce you to our latest venture, The Download! We're going to be highlighting new audiobooks for you to discover, talking to

Behind the Mic: Between Them
Robin Whitten | 06.17.17
AudioFile goes Behind the Mic to talk with Christian Baskous about his narration of Richard Ford's narrative memoir, BETWEEN THEM. Chris tells us about his unique preparations for

Celebrating 25 years of AudioFile Magazine
AudioFile Editors | 06.09.17
We're celebrating AudioFile's 25th anniversary this June (which also happens to be Audiobook Month!), and we'd love to have you join us! AudioFile started in 1992 as a source of