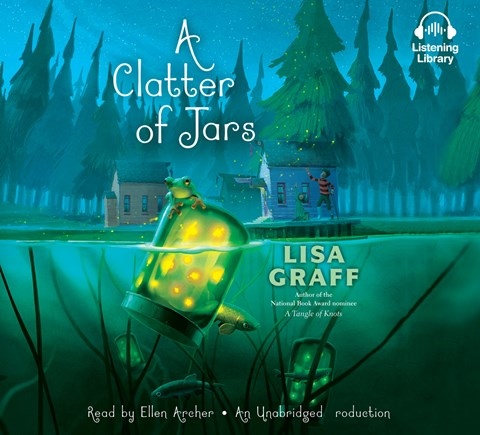 A CLATTER OF JARS

A singularly talented narrator, Ellen Archer, presents this deftly woven magical story set in a world in which people possess special talents. These range from the mundane, such as the ability to understand frogs, to the powerful, such as telekinesis. At Camp Atropos for Singular Talents, Cabin Eight's inhabitants grapple with family secrets, heartache, and the devious intent of a crooked camp director. Archer portrays the shifting perspectives of Lily, Chuck, Remy, and other young campers, as well as recurring singularities such as the language of frogs, the beautiful tones of a magical harmonica, the rich notes of a melancholy Spanish lullaby, and the stilted speech of a unique boy. Keep a pen handy to jot down the magical drink recipes! L.T. Winner of AudioFile Earphones Award © AudioFile 2016, Portland, Maine [Published: MAY 2016]