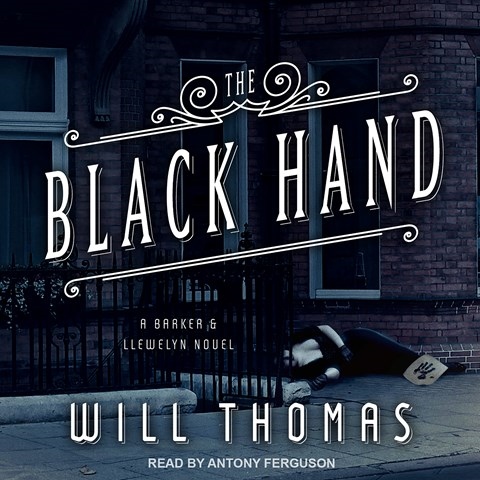 by Will Thomas | Read by Antony Ferguson

The notorious Black Hand, an early version of Sicilian organized crime, is spreading throughout the wharves and warehouses of 1880s London, and the authorities can do nothing. But fear not. Scottish-born ace enquiry agent Cyrus Barker and his Welsh assistant, Thomas Llewelyn, are on the case. With a good mix of English reserve and theatrical bravado, narrator Antony Ferguson takes on a plethora of Scottish, Welsh, English, French, American, and, especially, Italian accents to tell this energetic story, which includes the detectives having to convince Cockney Londoners to cooperate with Irish laborers. This novel is the fifth in the series but can stand alone. One hears a little extra pathos when Llewelyn discovers some clues to his mentor's closely guarded personal history. B.P. © AudioFile 2017, Portland, Maine [Published: OCTOBER 2017]