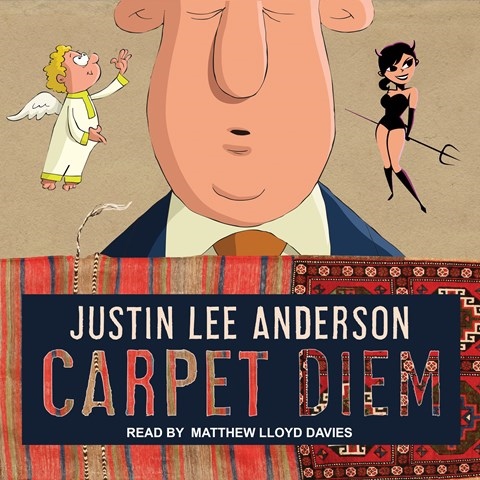 CARPET DIEM Or...How to Save the World by Accident

Narrator Matthew Lloyd Davies shines in this funny, vivid story in which a hermit, Simon, and his favorite rug must decide the fate of the world when an unusual pair of beings visit his home. The unusual premise develops into an engaging journey through evocative world building, endearing and intriguing characters, and a heavy dose of humor. Davies's ability to juggle multiple narratives and a sizable cast of characters is both refreshing and delightful; he skillfully switches accents, personalities, and sides of battle, adding depth and relatability to each character. Anderson's storytelling is multilayered and inventive, and Davies's warm tenor is comforting yet invigorating. Together, they carry listeners deftly through Simon's adventure. An ideal listen for fans of Douglas Adams and Terry Pratchett. K.S.B. 2018 Audies Finalist © AudioFile 2018, Portland, Maine [Published: MARCH 2018]