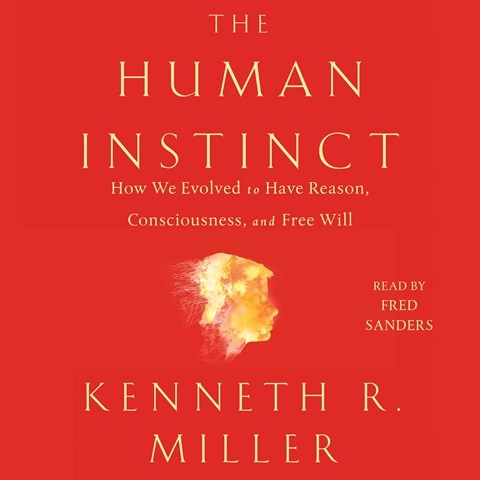 HUMAN INSTINCT How We Evolved to Have Reason, Consciousness, and Free Will

Tackling the thorniest of thorny issues--human development and the nature of humanity itself--Kenneth R. Miller sets out to retell the story of our evolution. Thankfully, Fred Sanders offers a steady performance, unflagging despite the breadth, depth, and spiritual weight of the subject matter. In the fields of science and philosophy, human development is most often considered through the lens of determinism (scientists) or free will (philosophers). Masterfully blending scientific detail and philosophical inquiry, Miller persuasively argues for something in-between. With his gravelly voice and even tempo, Sanders adds counterweight to a ponderous narrative, enabling listeners to soak up the details while reflecting on the overall argument at hand. A provocative listen for those interested in personal or public debates about human origins and identity. A.S. © AudioFile 2018, Portland, Maine [Published: JUNE 2018]