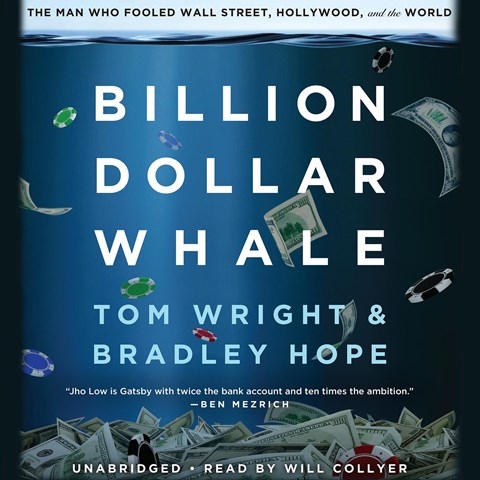 BILLION DOLLAR WHALE The Man Who Fooled Wall Street, Hollywood, and the World

by Tom Wright, Bradley Hope | Read by Will Collyer

If absolute power corrupts absolutely, then what of the seductive power of money? This compelling audiobook tells a tale we've heard before: In 2009, a creative genius named Jho Low uses his abilities and position to steal billions of dollars from investment funds that are supposed to be built to repel such efforts. Narrator Will Collyer has an expressive, spirited voice that propels this unlikely story forward and animates the author's words. Collyer reads confidently, pauses for effect, and verbally winks when necessary. He doesn't create characters but makes it clear when there's a quote and changes his pitch to punctuate emotions. The result is a cracking story told well and narrated with professional assurance. R.I.G. © AudioFile 2018, Portland, Maine [Published: DECEMBER 2018]