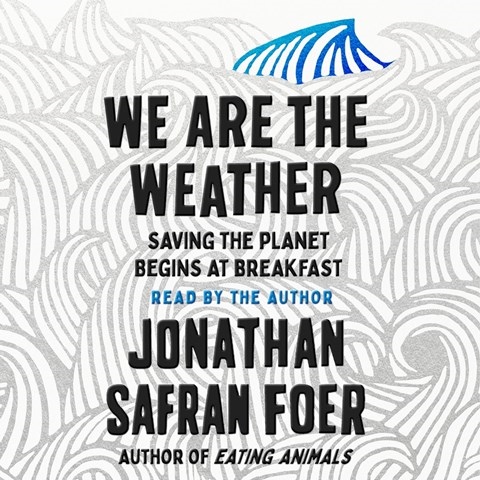 WE ARE THE WEATHER Saving the Planet Begins at Breakfast

Narrating his own work, Jonathan Safran Foer admits he doesn't have the answer to the world's most imminent problem, which he is purposely slow to identify and confront. The thing is, climate change is overwhelming and heady. The problem isn't that we don't know about the threat it presents—it's that we don't believe in the threat enough to make the necessary radical changes. For Foer, this work of interrogation is as much personal as global, and his performance reveals as much. He is steady, but not overconfident. His tone stays even, despite his creeping doubt. This call to action is a thought experiment in which Foer debates himself. A more experienced narrator would have delivered a more nuanced performance, but perhaps imperfect action is the point. A.S. 2020 Audies Finalist © AudioFile 2019, Portland, Maine [Published: SEPTEMBER 2019]