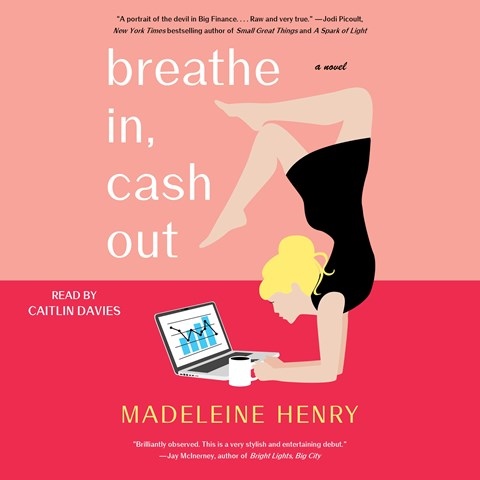 BREATHE IN, CASH OUT

Narrator Caitlin Davies brings a wry sense of humor to Allegra, a.k.a. April Ludgate, whose life is severely out of balance, contradicting the yogi lifestyle the Wall Street banking analyst desperately wants. Davies's tone is crisp and fast as Allegra battles rage and sleep deprivation in her determination to remain employed among frat boys and robotic women until year-end bonus time. Then she'll finally have the funds for a career change! Davies hilariously voices whining co-workers spewing graphic hate-filled speech as they compete for who has the worst gig. The cold office environment with the boss barking orders contrasts with the warm fitness studio where serenity flows from the yogis' soothing voices. A.L.C. © AudioFile 2019, Portland, Maine [Published: SEPTEMBER 2019]