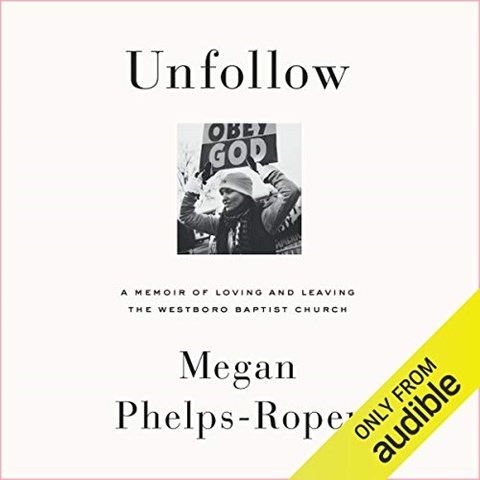 UNFOLLOW A Memoir of Loving and Leaving the Westboro Baptist Church

Author-narrator Megan Phelps-Roper tells the unsettling story of her upbringing. She is the granddaughter of the founder of Westboro Baptist Church (Kansas), notorious for its homophobic rhetoric, celebration of natural disasters, and picketing of soldiers' funerals. Her voice never wavers as she details her role in spreading the church's virulent messages on social media. She even creates distinct voices and mannerisms for the friends and family members she frequently quotes. In doing so, she builds a vivid picture of the path that transformed her from a zealot to a compassionate woman who ultimately left her church and her entire family behind. As our world becomes increasingly polarized, Megan Phelps-Roper's story is an especially important empathy builder. A.K.R. © AudioFile 2019, Portland, Maine [Published: DECEMBER 2019]