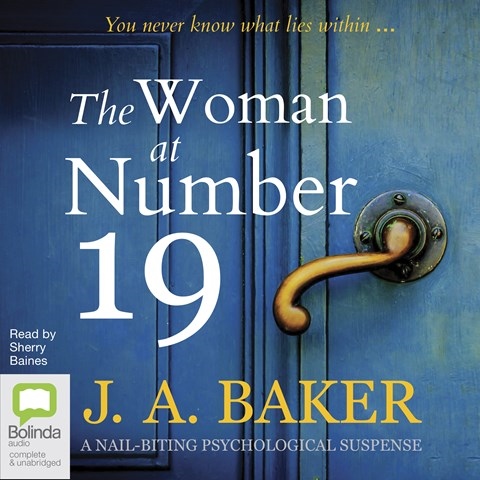 THE WOMAN AT NUMBER 19

Wonderfully narrated by Sherry Baines, this psychological thriller is fraught with uncertainty, possibility, and quiet menace. Reflecting appropriate anxiety and tension, Baines delivers the story of Esther, a former teacher who is obsessed with the deaths of her unfaithful husband and their two children in a traffic accident. Witnessing her next-door neighbor's abusive treatment of her children infuriates her, so Esther begins to chronicle the activities of the woman, whom she names Veronica, in order to provide the police with annotated incidents. Baines turns Esther's interactions with others into a series of chilling exchanges, and while listeners will realize early on that Esther is an unreliable narrator, thanks to Baines's winning performance, they will keep listening until the bitter end. S.J.H. © AudioFile 2020, Portland, Maine [Published: MAY 2020]