Say hello to Kirsten Potter, a narrator I count on to enhance the mood of whatever audiobook I’m listening to, from fun romance to creepy thriller to serious science. I always appreciate her well-thought-out characterizations and attention to the pacing of the story.

Kirsten has performed dozens of standalone audiobooks over her career and has also been tapped for returning roles. For example, she is the voice for Dianne Duvall’s very popular Immortal Guardians series; these paranormal, action-packed romances have garnered her many loyal fans.

If you’re looking for something a little tamer, don’t worry. Kirsten has performed young adult fiction, classics, thrillers, literary fiction, and a variety of nonfiction. Let’s take a closer look at some of her work. 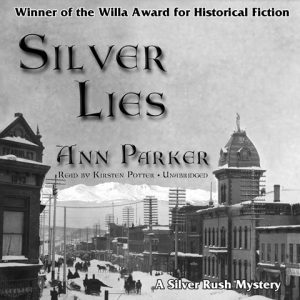 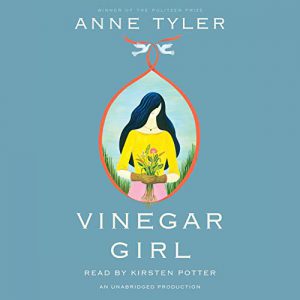 Set in Colorado when the West was still wild, Ann Parker’s SILVER LIES is the first in a mystery series starring a poker-playing, saloon-owning woman who can take care of herself, despite her genteel city upbringing. When Inez Stannert reluctantly agrees to help a townswoman settle her late husband’s affairs, she discovers signs of foul play. Kirsten’s interpretations of the diverse cast of characters are right on the money, keeping us fully invested in figuring out whodunnit.

VINEGAR GIRL by Anne Tyler is part of the Hogarth Shakespeare series, which are reimaginings of the Bard’s plays. In this modern-day take on The Taming of the Shrew, Kate works full-time plus runs the household for her younger sister and her research scientist father, both of whom seem to take her for granted. Kirsten picks up on Kate’s sharp tongue, her feminist stance, and her eye-rolling disbelief at her father’s latest scheme to save his research and see her married. Kirsten talks about her work on this audiobook in a short video. 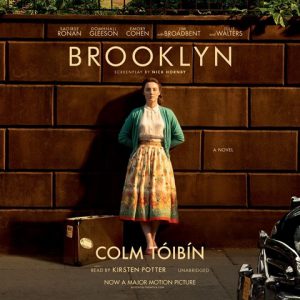 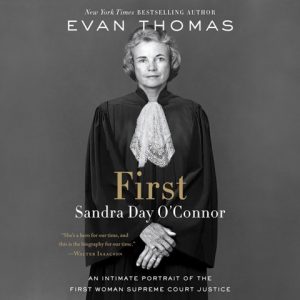 In BROOKLYN, Colm Tóibín explores the postwar immigration experience through the story of a young woman who leaves her Irish village for new opportunities in America. Besides adapting to a new country, Ellis, our hero, must reconcile her obligations and connections back home with a more worldly future filled with diverse viewpoints. Kirsten’s smooth, quiet delivery and sensitive characterizations allow Tóibín’s words to bloom.

Evan Thomas’s FIRST follows the life of Sandra Day O’Connor, the first woman to serve on the U.S. Supreme Court. Her appointment to the Court, however, was only one of O’Connor’s many firsts, as she transformed herself from cattle rancher’s daughter to law school graduate, opening doors for the women who came after her. Kirsten’s expressive delivery captures our attention, and her subtle change in tone clearly separates quotations from the narrative text, guiding us through this fascinating biography. 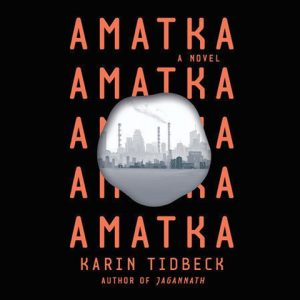 The dystopian world described in AMATKA by Karin Tidbeck is unique in the genre. Words and language have the power to solidify made objects; thus the government strictly regulates the everyday lives of its citizens. One outpost, however, is questioning the rules and the propaganda, threatening the fabric of society. Kirsten taps into the emotional layers of the characters, reminding us that, despite the unfamiliar circumstances, humans are still driven by the desire for freedom and love.

After years of listening to Kirsten Potter read to me, I thought it was high time to get to know her as a person. I’m grateful she agreed to answer some questions and allow us to share her answers with you.

Kirsten Potter: One thing I wish I’d known is that I would so rarely have time to read just for pleasure! This has definitely had its upside, though. I don’t know that I would have naturally been drawn to a biography on Warren Buffett or Sandra Day O’Connor or to an out-of-this-world dystopian future novel like THE SKY IS YOURS, but my reading life is far richer for having delved into these titles. So, I sometimes miss reading, odd as that sounds. I’m not complaining though. I’m happiest when I have a nice, juicy stack of narration projects to dive into.

KP: In addition to voicing audiobooks I have occasionally voiced a few video game characters. I’m currently the Queen of the Reef in Destiny. I have also voiced a giant polar bear (Guild Wars) and Iron Man’s helmet (in one animated series).

KP: I have a passion for home improvement projects. Some of that is need-driven—we got a new house recently, which I absolutely love, but it needs some work. So, I’ve been drywalling, installing floors, rewiring electrical outlets, installing backsplashes. We don’t have a ton of space, but I’d love to have a table saw someday. Oh, the things I could do with that! There’s a producer I work for, whom I just love, who jokes that he sends me books to narrate just to keep me from sawing my fingers off. (At least, I think he’s joking.)

KP: Ugh. This was near the beginning of my career, and I wasn’t actually in the booth, I was prepping for the next day’s recording. It was one of those lovely, really busy stretches when I had a pile of projects to narrate, so I was “saving time” by doing my pre-read just a day ahead of my narration. Beginner’s mistake. Never do this—especially with detective fiction. So, I’m prepping around page 379, having recorded earlier that day up to page 200 or so, when I read, “. . . he said in his thick Texas drawl.” This was a character who’d been speaking, rather frequently, for the past 378 pages: 200 of them recorded without a Texas accent! A big chunk of my next recording day was spent rerecording all of his lines. And I never recorded another book without a full pre-read again.

AFM: What are the pros and cons of recording a series?

KP: I’m not sure I see any cons. I love the series I’ve been on, and I think it’s because I’ve been so fortunate as to have such well-written ones. Hawker, Hattie, DD, Roland, Maggie, Deydie—these characters feel like friends of mine, people I’ve known for years who’ve changed and evolved over time. A character will be the protagonist of one book and a supporting player in the next, but my experience of them, and therefore their voice, will be so much richer because I know so much about their backstory.

Thanks so much for talking with us, Kirsten. I can’t imagine the sinking feeling of being that far into the project before discovering the Texas accent. Ugh indeed. How cool that you’re able to do so many home projects; I’m not that comfortable around power tools.

If you’re interested in looking more closely at the series Kirsten mentions or any other audiobook she’s performed, be sure to take a look at our reviews.

I still remember the audiobook that led to my discovery of today’s Take 5 featured narrator, and since that first listening experience, I’ve sought out Joy

Behind the Mic: Vinegar Girl
AudioFile Editors | 09.10.16
Narrator Kirsten Potter speaks to us from her backstage dressing room as AudioFile goes Behind the Mic to hear more about her audiobook performance of Anne Tyler's VINEGAR