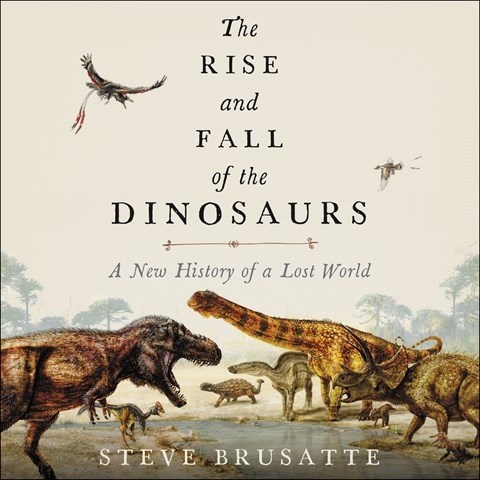 Ever since Jurassic Park was released in June 1993, the summer has belonged to dinosaurs. I mean, you or a close family member have already seen this summer’s blockbuster, Jurassic World: Fallen Kingdom, right? So tell me, what does “brontosaurus” mean? Give yourself a gold star if you answered, “Thunder Lizard.” If you blanked, no worries. I’ve collected six titles that’ll inform and thrill your dino-loving outer adult and inner child. 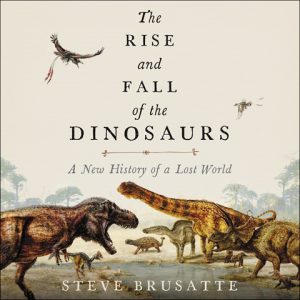 THE RISE AND FALL OF THE DINOSAURS by Steve Brusatte, read by Patrick Lawlor, is a captivating and informative “new history of a lost world.” Brusatte’s a youthful paleontologist with a taste for international adventure, and he leads a fun and occasionally dangerous tour from Chinese deserts to the American badlands, acquainting us with creatures that become more astounding the more we learn. By the way, did you know that before dinosaurs, the earth was dominated by pelycosaurs, archosaurs, and therapsids — aka ginormous meat-eating reptiles? I know, I know, this stuff is so cool. 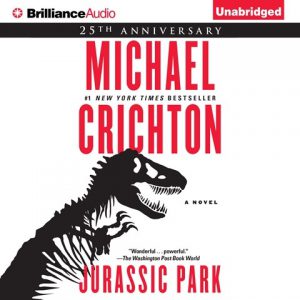 Now that you’re educated, go with the classic summer everythingbuster, Michael Crichton’s JURASSIC PARK. You know you want to, and besides, Scott Brick’s Earphones Award performance is worth hearing simply for its mastery of pace and character. This is such scary delight that it makes me shiver. Warning — don’t listen in the dark.

Same goes for Crichton’s sequel, THE LOST WORLD, also read by the inimitable Scott Brick for another Earphones Award. Did you think that all the rogue dinosaurs had been destroyed? Well, think again (while hiding under a blanket with your eyes closed). If you hated the movie, celebrate, because this audiobook is the real deal — scary and funny and even occasionally educational.

So, given what dinosaurs can do in a (supposedly) fenced park, you’re ready to sign up for Douglas Preston’s expedition to TYRANNOSAUR CANYON, New Mexico, where your suspenseful adventure will be narrated by Scott Sowers. I lived in New Mexico for eight years and had no idea that the high plateaus hid mythic beasts, mad monks, and evil paleontologists. Go figure. Listening to Sowers’s terrific performance offered hours of pleasure and clued me in on what I’d missed. 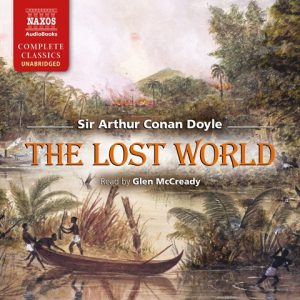 Yet another escapade awaits in Arthur Conan Doyle’s 1912 adventure classic, THE LOST WORLD. Did Crichton copy that title? Perhaps. But both books are grand. Glen McCready’s engaging performance of Professor Challenger’s quest for dinosaurs deep in a South American jungle is a delightful homage to Doyle’s dramatic, oracular style and an excellent way to spend a few hours.

Sated with thrills and chills, let’s finish with true exploration in THE DRAGON SEEKERS by Christopher McGowan. A Canadian curator of paleobiology, McGowan takes us deep into 19th-century bone pits and debating societies where scientists, academics, theologians, and just plain folk argued about the origin and identity of the “dragons” being discovered by early paleontologists. It’s fascinating. Narrator Stuart Langton is fully engaged, clear, and never stumbles once over the multisyllabic words. Try saying “archaeopteryx” quickly three times. That’s why Stuart Langton is awesome.

Growing up, my favorite dinosaur was stegosaurus, which looked more fetching in my “all about dinosaurs” picture books than in recent reconstructions. No matter. We now know that those bony plates along its spine glowed red when it was riled, which is a pretty hot look. Which was your favorite? No fair picking stegosaurus. And how about your favorite dinosaur-related audiobook?