Explore the World of Fantasy and Science Fiction Audiobooks

Put down your doomscrolling device and voyage with me out of earth’s orbit to different realms in five new fantasy and science fiction novels. A mix of stand-alone and series titles, they offer powerhouse female characters and the ultimate escape. There’s nothing like a trip out of time or into a different galaxy to give you a fresh perspective on life’s conundrums, such as whether to try the oat milk latte. 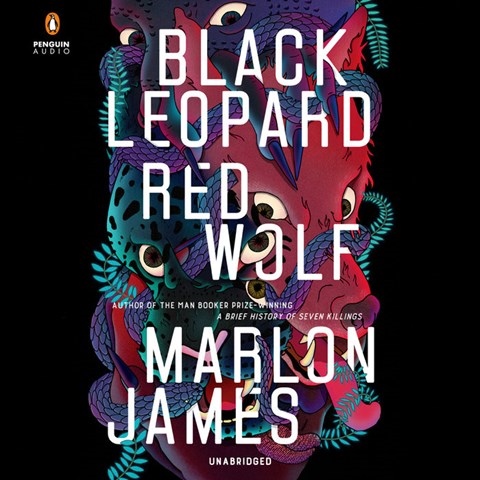 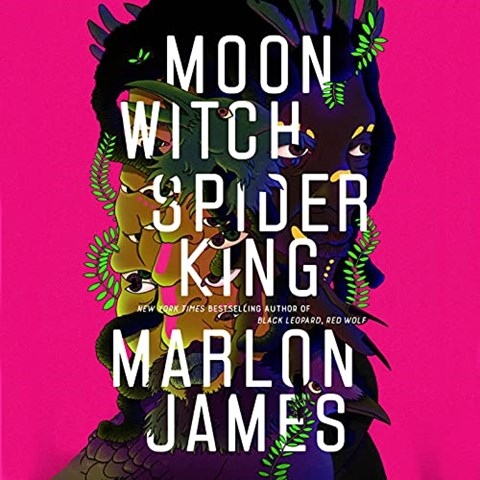 Let’s begin in a mythical, timeless Africa, with Bahni Turpin’s Earphones Award-winning performance of MOON WITCH, SPIDER KING by prize-winning author Marlon James. This is the second in his Dark Star Trilogy, which has been praised as the literary equivalent of a Marvel Comics universe. It reinterprets the first novel, BLACK LEOPARD, RED WOLF (read by Dion Graham and also an Earphones Award winner), from the antihero’s point of view. As Sogolon the Moon Witch recounts her dramatic 177-year life, we hear why she wasn’t responsible for the missing boy in the first book. Or was she? Speaking personally, Turpin’s chameleon-like performance enabled me to enter the thrilling story more completely than if I had been reading the remarkable but idiosyncratic writing. 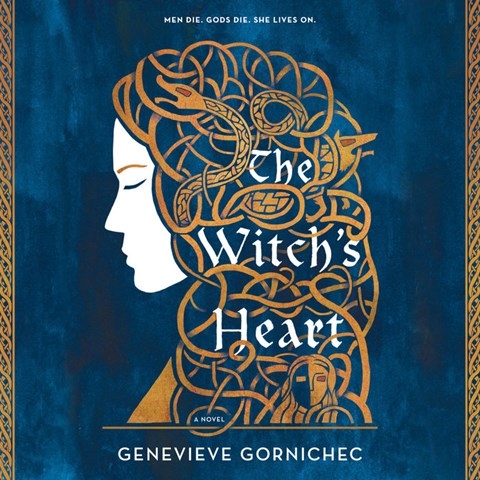 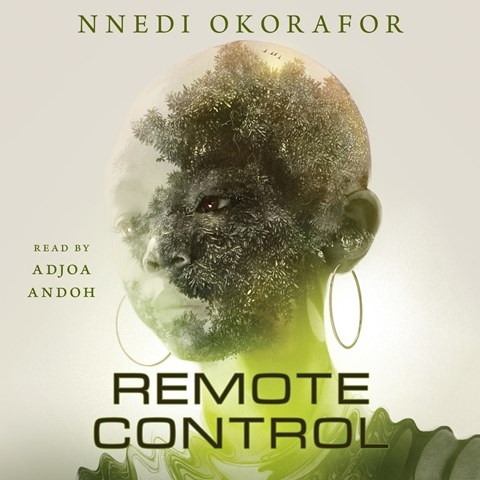 Staying with magically powerful female characters, we journey next into Norse mythology. THE WITCH’S HEART by Genevieve Gornichec has been given an Earphones Award-winning performance by Jayne Entwistle. It reimagines the legend of Ragnarök, here named Angrboda. Punished by Odin for refusing to share the power of prophesy, she is burned and flees into the forest to be rescued by Loki, the trickster. Their union produces three remarkable children, while the forest itself offers love in the form of Skadi, the huntress. This is a captivating production of a new classic.

What happens when a potent female character cannot control her power? In the moving fantasy sci-fi novella REMOTE CONTROL by Nnedi Okorafor, we meet young Sankofa, who is Death’s unwilling, adopted daughter. Transported by Adjoa Andoh’s Earphones Award-winning performance, we travel with Sankofa by foot across near-future Ghana as she learns to manage her deadly power and searches for the alien artifact that might free her from her toxic transformation. 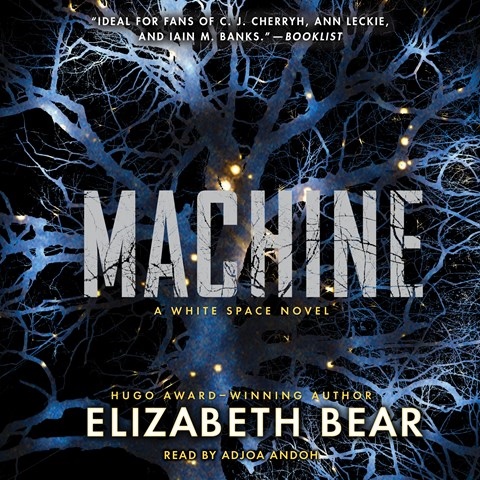 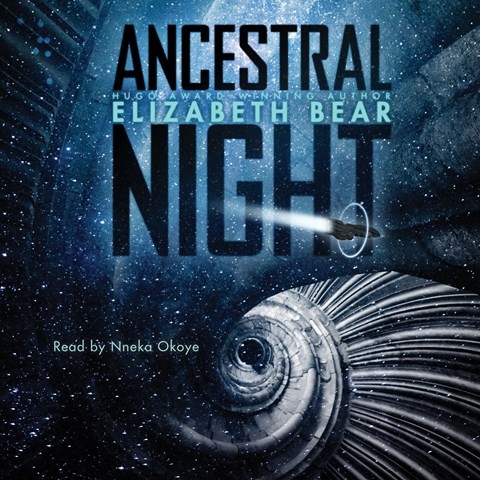 The ever-wonderful Andoh also narrates MACHINE, the newest of Elizabeth Bear’s White Space novels. Full of world-building, suspense, and philosophic quandries, the story introduces Dr. Jens, a trauma rescue specialist who tends to people, aliens, and androids in a massive space hospital in the far tomorrow. When she encounters a ship with thousands of humans in cryogenic suspension, trouble ensues. Thoroughly hooked, I wanted the story and Andoh’s performance to last forever. When they didn’t, I turned to the first in the loosely connected series. ANCESTRAL NIGHT takes place on an interplanetary salvage ship. Nneka Okoye’s nuanced performance carried me deep into space with Haimey Dz, her partner, Connla, and their sarcastic AI, Singer, as they dodged space pirates and alien parasites. So satisfying. 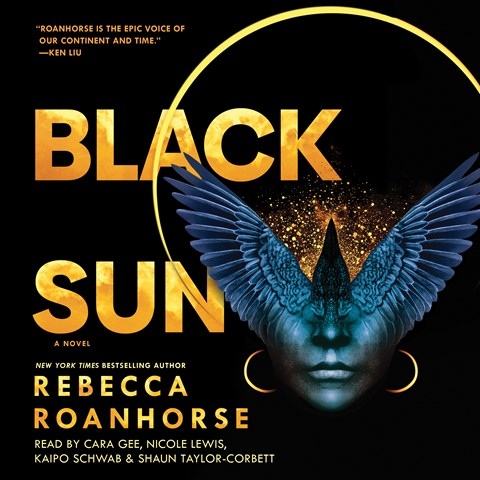 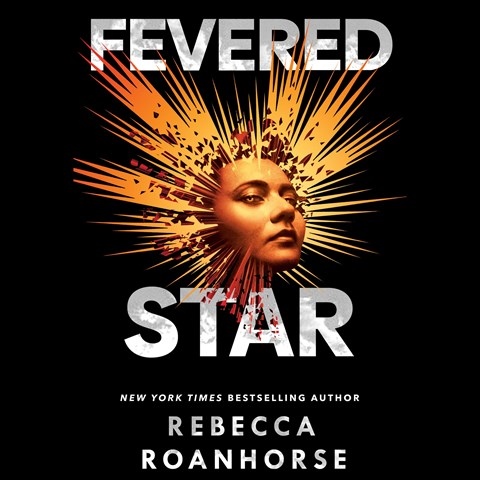 I’ll close with Rebecca Roanhorse’s Between Earth and Sky trilogy. Inspired by pre-Columbian civilizations of Central and South America, it weaves prophesies, magic, humans, and gods into an epic fantasy. In the first of the series, BLACK SUN, the winter solstice in the holy city of Tova does not go as planned after a ship with a blind, scarred passenger arrives. Read by a stellar cast—Cara Gee, Nicole Lewis, Kaipo Schwab, Shaun Taylor-Corbett—the tale about a man who is meant to be a god, a woman who controls the sea, and a priestess from the wrong family is vivid and transporting. Our reviewer also loved Roanhorse’s newest, FEVERED STAR, which is also performed by a talented full cast—Christian Barillas, Darrell Dennis, Cara Gee, Nicole Lewis, and Shaun Taylor-Corbett. Faced with a changed Tova, the protagonists must find a way forward while the sun is held in the smothering grip of the Crow God’s eclipse. Will an arriving comet mark the ruler’s death, as foretold? And if a new order does rise, what will it be?

There now. Pick one; pop in your ear buds; order the latte; and head off to otherworldly places and times. May the force be with you.

In April, cheered by Easter egg shades of crocus and chilled by the north wind, I welcome spring with chewy fiction. Beautifully written, intriguingly peopled, immersively