We’re celebrating the 32nd anniversary of the Americans with Disabilities Act (ADA) becoming law with an introduction to our curated audiobook list about Disability Pride. Narratives of Disability Pride center on the experiences and achieved goals of the many differently abled activists who have brought changes to our shared experiences of the world, and on those who follow pursuits that engage their interests even when told they “can’t.” From curb cuts to adoption regulations, closed-captioned broadcasts and public meeting American Sign Language interpretation, athletics, and publishing, their work has created ways to remove barriers in the physical, service, social, and political spheres. Let’s take a tour of some of the titles featured on our list.

Perhaps the most generally recognized person in today’s Disability Pride community is Judy Heumann, who was instrumental in making the Crip Camp documentary a success. BEING HEUMANN: The Unrepentant Memoir of a Disability Rights Activist brings listeners a wealth of insight on the barriers created in the pre-ADA world at every level of her education, her fight for independence as an adult, her friendship with Ed Roberts, and her political engagement. All this is delivered with an equally energetic narration provided by Ali Stroker, making this audiobook a fine convergence of literary and voice acting talent. Speaking of Ed Roberts, where is the biography, and thus the audiobook, about his leadership in the independent living community? To date, there has been none published, so there is an opportunity in waiting.

For an introduction to the wide and varied group of contemporary Americans for whom disabilities are facts of life and their successes as well as their ongoing frustrations with physical and cultural barriers, listen to DISABILITY VISIBILITY. Through the Disability Visibility Project, editor Alice Wong has collected more than three dozen essays and interview transcripts from a wide range of contributors who are racially and ethnically diverse. Narrator Alejandra Ospina brings the requisite emotions to her performance, as the contributors and their topics range widely: handling the sense of imposter syndrome experienced by a parent with disabilities, the relationship between a person and their guide dog, the need for self-description to replace labeling by others. Becoming disabled is something that can happen to anyone at any time, whether permanently through accident or illness or through a temporary injury such as a broken leg, so listen to these words of wisdom from those with experience. 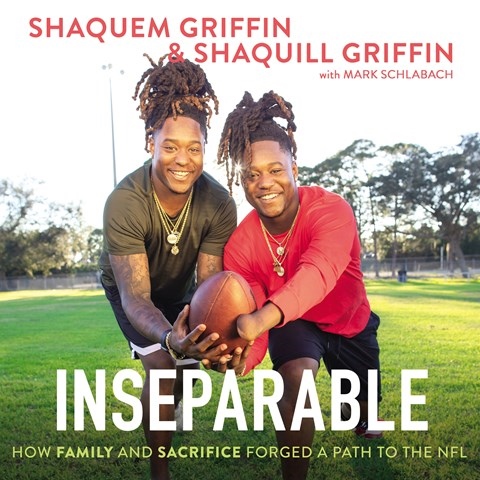 Beyond wider store aisles and transit stop announcements—among the many changes in our shared landscape that the ADA has brought to all of us—disability activists continue to change popular perceptions about who can participate in specialized areas of achievement. INSEPARABLE: How Family and Sacrifice Forged a Path to the NFL, by pro football players and twins Shaquill Griffin and Shaquem Griffin, receives a well-directed performance that gives each bother a unique voice through the dual narration of James Shippy and Marc Samuel. Together authors and narrators give a vivid and convivial account of how both twins became pro athletes even though Shaquem’s left hand was amputated at the age of four. 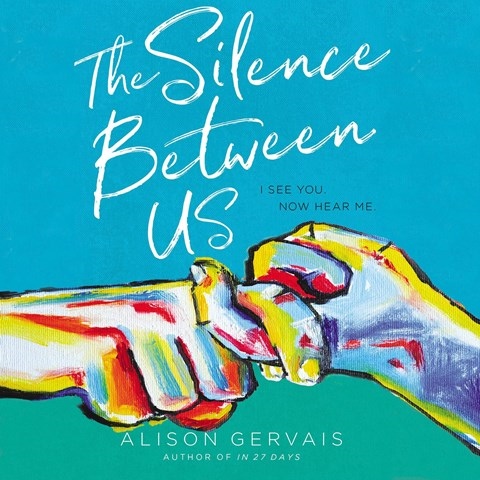 There are a few fiction titles on our curated list, and each of these features elements of Disability Pride. THE SILENCE BETWEEN US, written by Alison Gervais, who identifies as Hard of Hearing, comes to audiobook listeners through the remarkable work of narrator Chloe Dolandis. The story revolves around Maya, a high school girl who has become profoundly deaf from a severe illness several years earlier; this personal history means she can speak relatively clearly and has cogent insights on the disconnects between deaf culture and the casual assumptions of those with typical hearing. Dolandis, who sings professionally as well as narrating audiobooks, uses her acuity with her voice to differentiate among the three languages in which conversations happen in this novel—oral English, American Sign Language, and the more rudimentary finger spelling—in a way that is both respectful and easy on ears that have typical hearing awareness. The grammar of these three languages differs, and both Gervais and Dolandis demonstrate the differences without taking listeners out of the story. Another Disability Pride aspect of the audiobook is contained in Maya’s observations about peers who have undergone cochlear ear implants. Who is “fixed” by this invasive step? Maya posits that, however noble the intention, those who alter their children’s hearing status deprive them of the culture and skills the deaf community can provide. Ironic as it may be, here is an audiobook with a wealth of discernment to offer about being Hard of Hearing in particular, and an enthusiastic proponent of Disability Pride in general.

There is so much to appreciate in these accounts of making the world a better and more adaptable place, and of the leaders who have been working on these projects for more than 50 years. All of these audiobooks, as well as the dozen others on our curated list, offer fine performances as well, so there’s every reason to include Disability Pride in your listening life.

On the occasion of AudioFile's 30th anniversary, Diane Reid spoke with editor and founder Robin Whitten about AudioFile’s origins, its growth, and how the mission