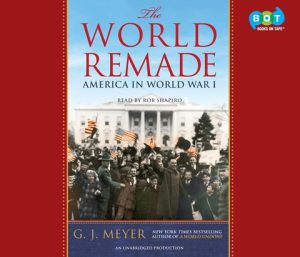 At age twenty-two, my grandfather looked a hero in his WWI pilot’s uniform. Peaked cap at a rakish angle, hand on his father’s shoulder, arm around his mother, he smiled broadly for the Brownie camera. Only the bulge of a service revolver beneath his jacket hinted at upcoming danger.

In this 100th anniversary year of America’s entry into the war, I wish I’d been able to hear about his experiences. He died when I was young, though, so I was never able to ask how the French battlefields looked from his biplane’s cockpit, how the rat-a-tat-tat of aerial combat really sounded, and frivolously, why didn’t he wear a silk scarf in the photo? Or did that sartorial flourish belong only to Snoopy’s Red Baron? 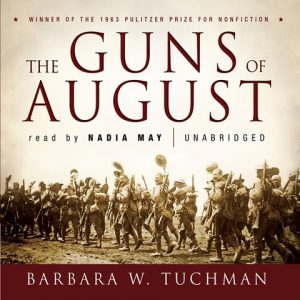 Instead, I’ve found a vicarious experience of my grandfather’s war in books and film, beginning with Barbara Tuchman’s Pulitzer Prize-winning history of the war’s start, THE GUNS OF AUGUST. I read it as a teenager, and recently listened to the Earphones Award-winning performance by one of my favorite narrators, Nadia May (also known as Wanda McCaddon). That’s two prizes for one compulsively readable account of the dares and double-dares that caused so much bravery and death.

I’ve also been impressed and informed by G.J. Meyer’s histories, A WORLD UNDONE: THE STORY OF THE GREAT WAR 1914-1918, read by Robin Sachs, and new THE WORLD REMADE: AMERICA IN WORLD WAR I. Meyer’s portrait of President Wilson is controversial, and I’ll have to listen to more books to decide if it’s true. But narrator Rob Shapiro, in well-tempered mid-Atlantic tones, gives an Earphones Award-winning performance that kept me hooked despite wanting to line the generals and leaders up before a firing squad for the wanton waste of lives other than their own. 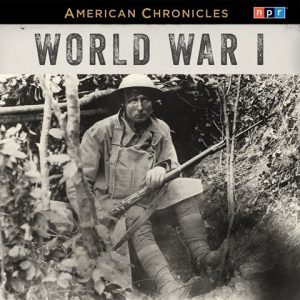 History books offer a useful overview, but when I really want to understand something, I often turn to such personal stories as those in NPR AMERICAN CHRONICLES: WORLD WAR I, hosted by Rachel Martin. It offers a wealth of individual reminiscences and excellent reporting which brings our compatriots’ experiences so much to life that I was transported over there with the other Yanks.

My grandmother was actually a schoolgirl in Europe when the combatants declared war. Caught by surprise, she and my great-grandfather fled over several borders before finding safe passage home. As Eric Larson’s DEAD WAKE: THE LAST CROSSING OF THE LUSITANIA makes clear, many civilians were not as lucky. Scott Brick’s performance, which won an Earphones Award, is a perfect match for this nonfiction bestseller which reads as compulsively as fiction. 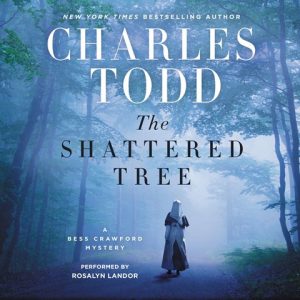 And in fact, fiction is where I go for the most harrowing and personally engaging descriptions of life during and after World War I. Pat Barker’s trilogy, REGENERATION, THE EYE IN THE DOOR, and THE GHOST ROAD, which won the Booker Prize, takes place variously in a British war hospital and battlefield trenches. Peter Firth’s understated performance of all three lets Barker’s eloquence and her unforgettable characters shine.

Charles Todd’s Bess Crawford mysteries, read by Rosalyn Landor, take me to the battlefield and the home front in the company of a redoubtable young nurse who must cope with the social limitations of the era, as well as blood and gore. The most recent, THE SHATTERED TREE, set Bess to investigating the past of a wounded soldier found in no man’s land – is he French or German? Todd’s newest, A CASUALTY OF WAR, is due out on September 26th. Only five days to wait. 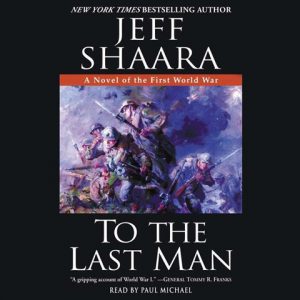 Jeff Shaara’s TO THE LAST MAN, for which Paul Michael won an Earphones Award, drops us into the trenches in 1916 and takes no prisoners as it fights forward through America’s entry in the war to the end. It’s a tough, edge-of-your-seat listen.

Finally, Erich Maria Remarque’s battlefield classic ALL QUIET ON THE WESTERN FRONT, sensitively read by the late Frank Muller, focuses on young German recruits. Marketed now as a young adult novel, but perfect for adults as well, it reminded me that whichever side you’re on, the experience of war – awful and transcendent – is universal.

Aurelia's Audio Adventures: My Personal Time Machine
Aurelia C. Scott | 08.10.17
As a kid, I spent hours perusing an illustrated coffee-table book about ancient Egypt, imagining myself as Queen Nefertiti. Then I went through a period of wearing wooden clogs,