Narrator Gabrielle de Cuir on THE MAN IN THE BROWN SUIT

Agatha Christie's THE MAN IN THE BROWN SUIT is a departure from some of her other well-known mysteries—it's more of a thriller and spy novel. Gabrielle de Cuir, who co-narrates along with John Lee, shares why it's worth a listen.

"THE MAN IN THE BROWN SUIT is a little bit different in nature than the "body in the library" mysteries . . . put your crush for Miss Marple and Poirot aside just for a bit and have a listen."—Narrator Gabrielle de Cuir 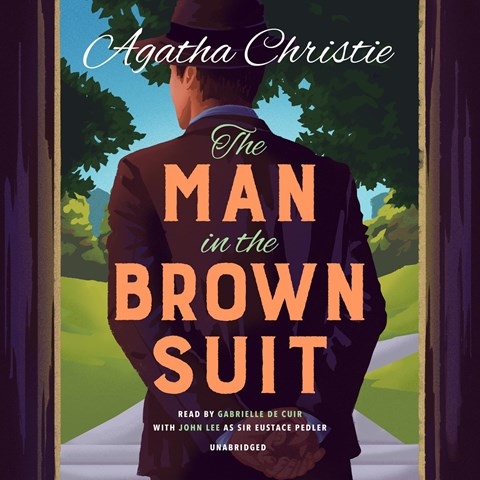 While this mystery was first published in 1924, narrators Gabrielle de Cuir and John Lee enliven the characters through their fresh, well-paced, pitch-perfect performances. Anne Beddingfield pursues her dream of becoming an adventurer and travels by ship to South Africa to unravel a mystery. De Cuir’s portrayal of Beddingfield projects a feisty character whom listeners will cheer for. John Lee masterfully delivers extracts from the diary of the imperious Sir Eustace Pedlar, MP.

Hazel Greenlee works transcribing police reports—and then she becomes involved in one of the cases. Angela Dawe tells AudioFile listeners about narrating HELLO,