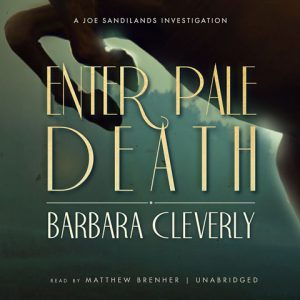 As a kid, I spent hours perusing an illustrated coffee-table book about ancient Egypt, imagining myself as Queen Nefertiti. Then I went through a period of wearing wooden clogs, not because they were trendy, but because they were favored footwear in 16th century Holland. Clearly, if a functioning time machine were invented, I would hop aboard. Until then, I voyage into the past on S.S. Audiobooks.

Barbara Cleverly’s mystery series about Scotland Yard Detective Joe Sandilands is set in India, England, and France in the 1920s and 30s. It’s replete with high adventure, murder, a tiger or two, edgy social commentary and comedy, and dressing for dinner – which everyone did, don’t you know. I wear my best after-dinner outfit (aka bathrobe) to listen. Two of my favorites are ENTER PALE DEATH read by Matthew Brehner and THE DAMASCENED BLADE read by Terry Wale, but if you, too, love this time period, go for it and read all thirteen (and counting!). 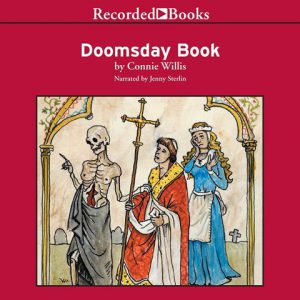 Science fiction novelist Connie Willis actually did give me a time machine in her masterwork, THE DOOMSDAY BOOK, read by Jenny Sterlin. We start at Oxford University in 2045, where the best way to study history is to go back there. But when Kivrin lands in 1320, all does not go as planned, which I should bear in mind if I ever am offered a trip. Meanwhile I’ll just listen again to this fascinating and heart-twisting novel about what we will do for love.

Historian Bernard Knight’s engaging ‘Crowner John’ series about a 12th century English coroner has allowed me to solve murders while eating off wooden trenchers, drinking doubtful elixirs, and dodging the garbage in the center trough of most of Oxford’s streets. Paul Matthews, who narrated them all, clearly relishes Knight’s well-drawn characters and the plots that reflect the issues of the time. A couple of my favorites are FEAR IN THE FOREST and THE NOBLE OUTLAW. 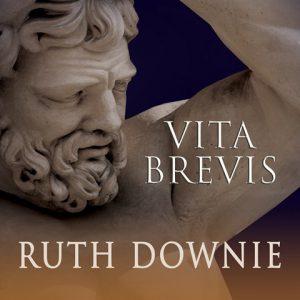 When I want to head even deeper into the past, I listen to Ruth Downie’s meticulously researched series about Medicus (doctor) Gaius Ruso of Gaul and Britannia in the Roman Empire. Performed by Simon Vance, an AudioFile Golden Voice, he solves crimes while navigating the intersecting worlds of the Roman military and the locals in an occupied land. The tightly plotted series is addicting, including the newest, VITA BREVIS, which finds Ruso and family in the grandiose and filthy Rome itself.

So, if I ever am offered a trip back in time — at least back 500 years or so — I’ll be prepared because I’ve listened to Ian Mortimer’s travel guides. The delightful pair — The Time Traveler’s Guide to Medieval England read by Jonathan Keeble and THE TIME TRAVELER’S GUIDE TO ELIZABETHAN ENGLAND read by Mike Grady — are just what the titles imply. They tell you everything. I now know how to dress like a local, which hostelries are safe, and where to find the best ale.

What audiobooks have you listened to that transport you to another time? Share your favorites in the comments!

Solve: When I listen to audiobooks
Jen Forbus | 07.10.17
It's been about 15 years since I started listening to audiobooks regularly for my own enjoyment. Prior to that, I would use them in my high school English classes on occasion so my

Aurelia's Audio Adventures: Aurelia Says Hi!
Aurelia C. Scott | 07.06.17
Over the years as a Contributing Editor for AudioFile Magazine, I have heard and reviewed about a gazillion audiobooks and interviewed fewer, but still many, authors and narrators.