Home » Articles » Self: Current Events, Critical Thinking, and You

Self: Current Events, Critical Thinking, and You 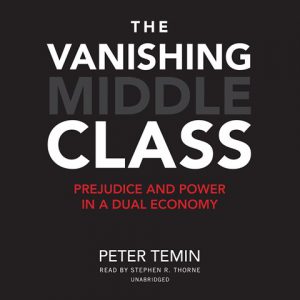 The learning audios I heard this month are about a range of issues that people are thinking about today: the growing gap between the rich and the poor, the erosion of contract between corporations and labor, some important social science topics, and a timely lesson on the way we acquire knowledge of the world.

We’re all seeking clarity, and finding it requires a commitment—whether you’re working on understanding yourself or becoming better informed as a consumer, employee, business owner, or citizen. These audiobooks can help because once you decide to start listening, thinking more critically becomes a habit and a priority. By just making the time and paying attention, you can absorb the substance and stimulation you need to participate more fully in life.

THE CONFIDENCE GAME: Why We Fall for It . . . Every Time
Written and read by Maria Konnikova
Penguin Audio/Books on Tape

THE END OF LOYALTY: The Rise and Fall of Good Jobs in America
Written and read by Rick Wartzman
Hachette Audio

This post has been edited from its original longer form in the print issue of AudioFile Magazine, August/September 2017.

Self: On Living
Tom Walken | 01.11.17
Kerry Egan offers listeners the gifts of love, courage, kindness, and laughter in ON LIVING, her memoir about serving as a hospice chaplain. ON LIVING written and narrated by

Self: Take Pride
AudioFile Editors | 11.27.16
AudioFile goes Behind the Mic to talk with Coleen Marlo, narrator of TAKE PRIDE. Listeners get an eye-opening examination of the uniquely human emotion of pride from author Jessica

Self: The Book of Human Emotions
AudioFile Editors | 11.20.16
Can we find the words for all the emotions we feel? AudioFile goes Behind the Mic with narrator Suzanne Toren to hear about her experience narrating THE BOOK OF HUMAN