“If you enjoy being read to, there’s nothing better than audiobooks. You can come and go--the format has fantastic advantages.” 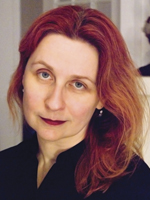 Moviegoers stood in line earlier this year to catch the film adaptation of Audrey Niffenegger’s THE TIME TRAVELER’S WIFE, but its creator wasn’t among them. That’s surprising for the visual artist who originally planned the book as a graphic novel. She says she was advised that it was best to set aside her interest when she sold the film rights. “It’s great for book sales,” she adds, a fact borne out by its reappearance on bestseller lists five years after its release.

Niffenegger describes her writing process as “chaotic” because in the past she held day jobs in printmaking and education, which forced her to squeeze writing into occasional free moments. “I work hard when I have something to do,” she adds, “and tend to work arduously until I exhaust what’s in me.”

Her novels are inspired by real places, but the unique element is Niffenegger’s technique of changing one rule in that world. THE TIME TRAVELER’S WIFE was a love story with a dramatic twist: The man comes in and out of his wife’s life due to his uncontrolled time travel. Niffenegger’s new book, HER FEARFUL SYMMETRY, relates twin sisters’ experience living near London’s Highgate Cemetery--complete with their very own ghost.

Niffenegger became interested in the beautiful Victorian cemetery in the early 1990s and toured it in 1996. The resting place of Karl Marx and authors Douglas Adams and Mary Ann Evans (George Eliot), Highgate opened in 1839 and is still conducting interments. The site’s owners, a nonprofit group called Friends of Highgate, were dubious when Niffenegger requested permission to research the private grounds. Eventually, they adopted her and, after her extensive study, even asked her to serve as a tour guide, a volunteer job she fulfills on her occasional visits.

Because of the story’s location, both U.S. and British audiobook publishers selected British narrators, whose readings Niffenegger has sampled. “I found them interesting and dramatic, “ she says. “When I read aloud [from this book], I think it sounds peculiar because I’m not English.”

Niffenegger was a frequent patron of the Chicago Public Library’s audiobook collection during her days as a letterpress printer, which demanded long working hours. “My all-time favorite is Jeremy Irons’s reading of BRIDESHEAD REVISITED.” She also enjoys recordings of live readings. “If you enjoy being read to, there’s nothing better than audiobooks. You can come and go--the format has fantastic advantages.”

Niffenegger fans have an upcoming book to anticipate. She’s begun a novel called THE CHINCHILLA GIRL IN EXILE. Nine-year-old Lizzie Varo has hypertrichosis--she’s covered with hair--and longs to abandon homeschooling and attend traditional classes. Niffenegger promises that Lizzie’s school experience will be another fascinating application of her signature “rule changing” technique.--Jenan Jones Benson