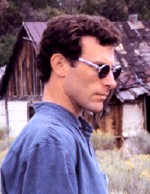 Like his father before him, Beau L'Amour is a master of detail. Louis L'Amour's legendary and persistently bestselling body of work created a lasting and convincing sense of authenticity by getting the details just right. And it's in the details that one finds good audio drama.

In his latest Louis L'Amour audio production, SON OF A WANTED MAN, Beau L'Amour had a hand in every facet of the project, from location scouting in the gold country of California to writing and rewriting to choosing the microphones.

That hands-on approach applies to the entire L'Amour canon. All cover art, Web site designs, and even dust jacket descriptions go by Beau for approval. And it all started with audiobooks.

"Originally, my dad felt that to charge eight dollars [in 1985] for a couple of audio cassettes was a little much. He wanted to up the production values and give people something extra for their money," Beau explains. To create that "something extra" and set L'Amour audios apart from other products, Louis agreed to try some full-cast adaptations of his Westerns, similar in style to classic radio dramas of the 1930s and '40s. Just in his mid-twenties at the time, Beau began an invaluable apprenticeship casting, script-writing, and finally directing this new and exciting medium.

Now at a youthful 44, Beau L'Amour finds himself a seasoned audio veteran at the helm of one of the longest-running and most popular drama series in audio publishing history. "I value audio drama because it's a collaborative medium," says Beau, who revels in the back-and-forth creative process that goes with working with talented actors, writers, and musicians. However, when asked what the biggest challenge in audiobooks is, he doesn't hesitate. "Matching the right narrator with the right material in an unabridged reading is one of the toughest and most important jobs in audio publishing," he says. "You have to use your gut instincts."

L'Amour listens to many audiobooks both as a professional and as a fan. His personal favorite is Anne Heche's reading of Stephen King's THE GIRL WHO LOVED TOM GORDON. "She just turned into that little girl."

Sometimes in casting, Beau likes to challenge the listener's preconceptions. "Once, a fan e-mailed me complaining that the early Sackett novels didn't sound right," Beau recalls. He had to explain: "The early frontiersman spoke English English in the 1600s, and even in the West of the 1880s there were dozens of accents around. There was no one American accent. It hadn't had time to develop."

Again, all those details his father so loved.

Beau, of course, is often asked about his father, who passed away in 1988. "People so want to see the writer as a Western character. Dad was definitely a macho guy, but he was remarkably well balanced and family-oriented." Although he has dabbled in the Hollywood film scene, Beau appreciates that sense of balance and has found himself returning to the independence and freedom of telling his father's stories through audio drama.

With 300 million copies sold, Louis L'Amour's work continues to resonate with a worldwide audience. Beau L'Amour not only works to preserve and celebrate his father's legacy, he's found a wonderfully creative way to contribute to it, as well.--Brian Price