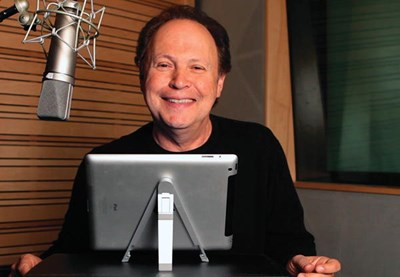 “The energy of performing is all the same. You have to interpret it. You have to bring it to life for the listener.” 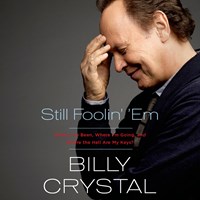 Billy Crystal stood before 300 people in an auditorium at New York University, his alma mater, reading chapters from his new book, STILL FOOLIN’ ‘EM: Where I’ve Been, Where I’m Going, and Where the Hell Are My Keys?

Whenever he flubbed a word or a passage, he repeated himself, as he had alerted the audience he would. His performance, he explained, would be folded into the upcoming audiobook version of his part-memoir, part-humor book.

He had already recorded all of it in a studio in Los Angeles, where the 65-year-old actor, comedian, and nine-time Oscar host lives with his wife, Janice. He had recorded in the studio partly as a backup, he said, and partly because he felt he couldn’t read the whole book in front of an audience.

“It’s hard to hold anyone with a 45-page chapter,” he said in an interview before the reading. More than holding the audience, he often had them in stitches as he read from chapters with such titles as “65 is not 60,” “Sex” (a word that elicited a squeal from a woman in the second row, to which he replied, “It’s not an offer”), and “The Elbow,” about his propensity to fall asleep at other people’s performances these days, and his wife’s way of waking him up.

He talked about older men following their wives around malls: “It’s like the march of the very depressed penguins.” He discussed Cialis ads and no longer looking at 25-year-old women: “Actually, I do, but they’re out of focus, and by the time I get my glasses on, they’re gone.” He did a great imitation of James Earl Jones, in front of whom he nodded off at a Broadway show. Many of the sections were a tad raunchy.

The material lends itself easily to performing, he said. “When I first started writing the book, it wasn’t a book. I thought it would be fun to do a tour of 20 cities or so with these stand-up pieces. But every time I finished one, it felt like a chapter in a book.” After eight chapters, he approached publishers. They were excited about his idea of including a live performance in the audiobook. “They went crazy. Their eyes lit up.” He ended up with a $4 million deal, he said.

The words on the page are intended to sound like him, too. (And they do.) “When people read it, they hear my voice. It’s a real challenge as a writer.” But when he delivers them in front of an audience, it’s like acting or doing stand-up: “The energy of performing is all the same. You have to interpret it. You have to bring it to life for the listener.”

Though the only other audio narration he’s credited with is an 11-minute rendition of Dr. Seuss’s HORTON HATCHES THE EGG, he is no stranger to the recording booth. As a star of such animated films as “Cars,” “Monsters, Inc.” and the recent “Monsters University,” he has often recorded in what he called “a nice little space.” He got practice in his live movies, too, such as “When Harry Met Sally…” and “Analyze This.” “It’s no different from looping the lines,” which actors do to smooth out dialogue. He never recorded his 2006 book based on his autobiographical Broadway play, 700 Sundays, he said, because he toured with the play, “and I didn’t want to give it away.” The show is to return to Broadway in November.

Still, this book is different. “It has dramatic moments, personal moments, and intimate moments. It’s a full plate,” he said. “It will be emotional for the listener. It is challenging because you’re giving of yourself--willingly, but you want the audience to have as good an acting and emotional experience as they can get.”

His New York audience got more emotion than expected when Crystal started tearing up while reading that he hopes he dies before his wife, who was in the audience, “because I don’t want to miss her.” He fumbled the iPad from which he was reading, almost dropped it, and lost the text from his screen. After he recovered, he repeated “I don’t want to miss her” and finished the chapter.

He got a standing ovation, which no doubt will be heard on the audiobook.--Aileen Jacobson