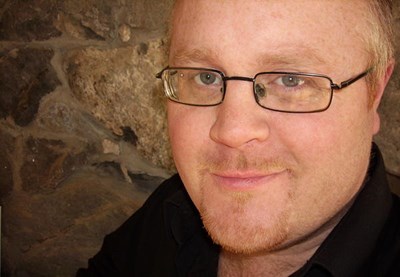 “It doesn’t matter what you write as long as you put in a piece of yourself, of your own humanity and experience--something genuine. It elevates the story and the readers’ caring.” 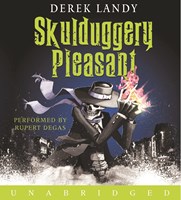 Author Derek Landy has had a stutter since the age of 3, and though it has improved with age, when he was young, he could never voice his wit.
“I was in a lot of situations where I’d be hanging around a lot of people and I would have the best joke in the world in my head, but I wouldn’t get involved in the conversation because I knew I would hesitate or I’d put so much importance and expectation into my remark that I’d wither.”

When Landy began to write, he invented intelligent, confident characters who talked with a speed equaled by the swiftness of their comebacks. “Everything I couldn’t do in speech I did in writing.” He wrote several quirky low-budget scripts like BOY EATS GIRL before the book idea for SKULDUGGERY PLEASANT hit him like a bolt of creative lightning. “I could easily write a hundred-page script, but the thought of a novel was daunting. I have a short attention span and get bored easily.” Wisely, he decided that fun would be his major motivation. He mixed genres that he loves--horror, magic, mystery, and monsters--and wedded them with a strong voice and humor. He’s now beginning his third in the series and plots another six books. “I’m having a complete blast.”

The books’ popularity has changed considerably more than Landy’s financial situation. The young man who says he spent a lot of time “on the fringe” now involves himself in every aspect of his books, and the fun keeps mounting. His role in the audio began with a long meeting with narrator Rupert Degas. Then he sent email descriptions of his characters, including thoughts about their nationalities, accents, and likenesses to specific actors. A conference call linked Landy in Ireland and Degas in England. Landy explains, “As we talked about characters, Degas slipped in and out of different voices, and I’d say, ‘That one, and that one, or that one, but a bit deeper voice,’ so the characters sounded exactly how I imagined them in my head.” Even though he’d been very involved, the final production stunned Landy with its perfection.

Degas has an exquisite range of tones and personas, but his most intriguing portrayal is that of the main character, Skulduggery Pleasant, the magical mystery-solving skeleton. He’s the ultimate in a multifaceted character, being a few hundred years old. “He’s not your typical good guy,” says Landy. “He’s friendly and witty, but behind it all is the coldness that lets him do the things he does.” Landy says he experiences Rupert Degas’s very fast dialogue “with pure joy.”

In May 2007, Landy went to Hollywood. “I had the most fun eight days of my life.” He got to talk to people he’d always respected and finally signed for a Skulduggery film with Warner Brothers. “It’s like having a dream come true.”

What one piece of advice can Landy offer to other writers who wish for the same? “It doesn’t matter what you write as long as you put in a piece of yourself, a piece of your own humanity and experience--something genuine--into your story. It elevates the story and the readers’ caring.” He sees much of himself in Skulduggery Pleasant.