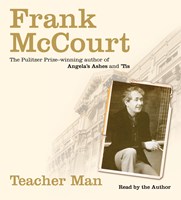 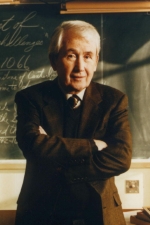 It is a special pleasure to talk with Frank McCourt, a retired schoolteacher and now a bestselling author three times over with a gift for the spoken word. Vitally honest, he is sincere, direct, pithy, charming, and sometimes self-deprecating as he talks about his newest book, TEACHER MAN, based on 35 years of teaching in New York City public schools.

Underneath it all, however, there is real anger and impatience over the outrageous things that go on in the name of public education in New York City. He sums up his classroom relationship with students by observing, “You know when you have them, and you know when you’ve lost them.”

What did he do when he found himself losing them? His reply is quick and decisive. “You change course! You inject something from your own experience and knowledge, and you gain their trust. And that trust doesn’t come from putting on a big act. They know if you’re a phony, and they have their ways of teaching the teacher!

“In New York City,” McCourt says, “public school teachers are over a barrel. They need more support physically and financially, and newspaper coverage of the school system is often unfair.”

What does a teacher do in such a situation? “A good teacher does not rant.” His tone softens as he talks about his years in the classroom, speaking with affection and respect for his students. “You learn to take off the mask, to stop being a phony, and while you do have a curriculum to follow, you get past just sticking to that. They like and respect honesty.”

When McCourt’s first book, ANGELA’S ASHES, was chosen to be an audiobook, he indignantly rejected his publisher’s suggestion that the reader be a professional actor, “perhaps a Broadway actor” (the writer’s brother Malachy, a character in the book, is such an actor!) and insisted on doing the reading himself. It was a wise decision since that book and its sequel, ‘TIS, were enormous bestsellers, and McCourt won both the Pulitzer Prize and the National Book Critics Circle Award.

His readings mirror McCourt himself--one hears a charming bit of a lilt and a way of conveying deep emotions nicely held in check, made all the more meaningful for his restraint.

While McCourt listens mainly to nonfiction audiobooks, his wife enjoys recorded fiction. “She just listened to the new Harry Potter book and said it was marvelous.” Asked about the importance of the oral voice to life and work today, this charming man answers with thoughtful discernment. “One thinks of NASA space explorations, where there are indeed vast mechanical contributions to the success of the space flights, but ultimately we depend on space-to-ground vocal talk.”--Louise Collins