“I discovered that one of my values was to make a difference and that the way I could do this best was to teach.” 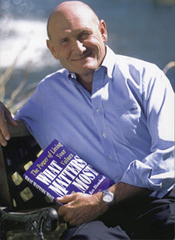 Though his is not a household name in audio publishing, Hyrum Smith has few peers when it comes to influencing people with the spoken word. The company he started 19 years ago, now called Franklin Covey, teaches time and life management to 60,000 people every month. His strong voice and enthusiasm for teaching have made bestsellers of his audios WHAT MATTERS MOST and THE 10 NATURAL LAWS OF SUCCESSFUL TIME AND LIFE MANAGEMENT. He is not as well known as his friend and colleague Stephen Covey (whose training and publishing empire his company acquired four years ago), but his success as an international speaker and leader of Franklin Covey’s 4,000 trainers makes his influence just as far reaching. He also developed the Franklin Day Planner, a goal-setting and time-management system used by 5 million people, which can now be integrated with a handheld computer, PC, and cell phone.

From his 3,000-acre ranch in Utah, where he keeps 300 cows and 25 horses, Smith explained his passion for helping people live their values. It started when he read the autobiography of Ben Franklin while moving up the ranks as a sales executive. “Franklin at age 27 discovered what his governing values were and then ordered his life around those values—it’s the reason we’re called the Franklin Company.” The book had a profound impact on Smith and eventually led to his writing his own mission statement: “I discovered that one of my values was to make a difference and that the way I could do this best was to teach.” Though being an entrepreneur was not in his background (his parents were both teachers), he decided to start his own training company. “This gnawing feeling came over me that I wanted to teach, and so we’ve created a 600-million-dollar company around that itch.”

In the midst of influencing people inside and outside such a large company, Smith manages to stay curious about how people today can achieve what matters to them in a world of digital and sensory overload. “At 2 a.m., before a corporate talk, I was thinking about how Julius Caesar believed his well-trained Roman army would conquer the world with new technology in the form of a bigger shield and smaller sword.” Smith says today’s gladiators also need training and the best tools—training to understand the principles of human effectiveness and tools for finding out what they value and how to put those values into practice every day. “What do people today really want in their lives? What tools can they use to shield themselves from junk email and other distractions?” Today’s gladiators need a competitive advantage just like the shield and sword for Caesar’s troops.

The result of this thinking is a gem of a book called THE MODERN GLADIATOR, which will be released this month along with an unabridged audio version. The author finished recording the audio in July and, though pleased with the result, he is glad to be finished. “Recording is a grueling process; I’d rather be talking to 600 people than speaking to a microphone in a studio with two coaches saying—‘No, you’ve got to do that again.’ It’s a punitive process for me.” But you wouldn’t know this from listening to his sparkling audio production of his previous work, WHAT MATTERS MOST (AudioFile, April/May 2001). He has the secure voice of someone who lives his values and the excitement of a rookie teacher who believes in what he’s teaching from head to toe.—Thomas Walken