“Reading is more intimate. You read at your own pace and can slow down to appreciate the language. But your experience becomes more real when you hear a novel read aloud.” 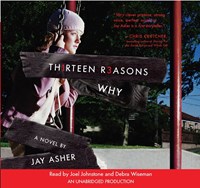 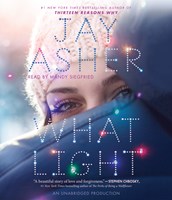 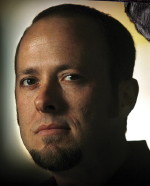 Sitting in on two recording sessions for his novel, THIRTEEN REASONS WHY, changed Jay Asher’s perspective on the words he’d written. The first day he heard Joel Johnstone reading the part of Clay Jenkins, the novel’s hero. Clay is one of the characters who receives a tape from Hannah Baker, a girl he loved but couldn’t save from suicide. Clay’s voice was just what Asher expected. “But it was surreal,” he says, “to hear words that you wrote being read by someone who’s putting emotion into them.”

On the second day Asher heard Debra Wiseman perform the scene in which Hannah Baker uses lowered tones as she plays cat-and-mouse with a Peeping Tom hiding outside her window. “In my mind, I’d imagined Clay with a female voice, talking at the exact same tempo as Clay. My first thought was, That’s not how I meant it to be read. But as I heard more and more, I thought, Wow, she’s taking it beyond how I wrote it. And I absolutely love it!” (You can read about this experience at his blog: discomermaids.blogspot.com.)

This change in perspective also characterized Asher’s first publishing experience. For years he had written humorous fiction for young children. Then, while listening to a King Tut audio tour in a Las Vegas casino, he thought about how the audio experience would make a fascinating focus for a book. The book idea didn’t come until later when Asher was living in Wyoming for six tense, dark, icy months. “I thought about how it would be to take an audio tour through a girl’s life after she’d decided to end it and how if you got the tape, it meant you were on it--you were one of the reasons why.”

Writing a novel so clearly destined for the audio format also changed Asher’s experience of listening. He’d mostly heard nonfiction work because he could listen without having to rewind. But since his own publication, he’s been converted to fiction. A recent favorite is Jerry Spinelli’s STAR GIRL. He found it was fascinating to hear the actor’s perspective, to see which words were stressed and how her impressions changed his view of the story. “Reading is more intimate. You read at your own pace and can slow down to appreciate the language. But your experience becomes more real when you hear a novel read aloud.”

Asher experienced another shift after speaking to high school students. “I never intended to talk to teens, but since I have, I’ve discovered they ask the most amazing questions. One student asked if I’ve ever considered suicide. I don’t think an adult would ask that kind of question.” Asher’s now writing his second book for young adults, convinced that it’s “the greatest age group to write for.”--Susie Wilde