"Auel’s books are published in 30 languages, as well as in audio. She loves the audio versions of her books, and once even took The Valley of Horses along on a trip." 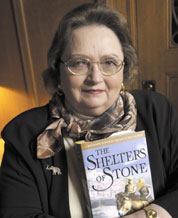 Fans of Jean M. Auel’s hugely successful Earth’s Children series have been waiting 10 years for the fifth book about Ayla and her companion, Jondalar, in Pleistocene Europe.

Now that The Shelters of Stone has finally been published, along with reissues of her first four books, Auel wants readers to know that she is grateful for their patience. Yet she cannot quite explain what took so long. Suffice it to say that life (she is now a grandmother), research, and the not-so-simple act of writing all conspired to slow her down.

Auel’s research is extensive and ongoing. In addition to maintaining a large library, she subscribes to most of the scientifically respected anthropological and archaeological journals and attends numerous conferences. It’s travel, though, that fires her imagination, enabling her to transform hard evidence into novels about a time so long ago.

Auel travels to Africa to see animals that are, she says, as close as we can come today to the animals that roamed the Ice Age steppes of Europe—clothe an elephant in fur, for example, and you have a woolly mammoth. She has been to the Lascaux Caves three times, “a powerfully spiritual place,” she says. The animals in the caves are painted to incorporate the bumps and dips of the cave wall; when you move, she says, they appear to move. In Spain recently, she saw the oldest discovered hominid skeletons in Europe (800,000 years old) and visited Cro-Magnon-era caves in the Basque region that few people have ever seen. She doesn’t take science notes when she travels to these sites. Instead, she strives to soak up the atmosphere, imagining what they must have looked, sounded, and smelled like when the originals of Ayla and Jondalar passed by 25,000 or so years ago. Auel’s books are published in 30 languages, as well as in audio. She loves the audio versions of her books, and once even took The Valley of Horses along on a trip.

Auel expects few trips for a while, though. After all, Book Six is waiting. Although she will not say what happens next, she does give one hint—an Ice Age cave was recently discovered in the Dordognes area of France. Inside are unique engravings and some burials. The Cro-Magnon did not customarily bury their dead in caves, but these have been dated. They are 25,000 years old—and that, says Jean Auel, is going to add a whole new dimension to what happens next.—Aurelia C. Scott