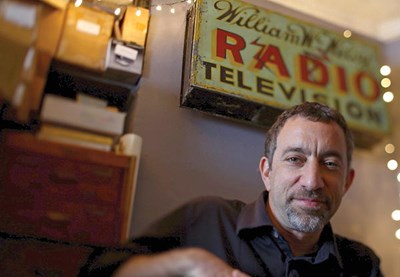 "My interest is to have the story be as much of an experience as possible. To really put people back into that history."

Women pilots of World War II, an undocumented worker who crossed the Rio Grande as a child, an unwed teenaged mother. Throughout his long career as a producer for National Public Radio and with his own nonprofit production company, Radio Diaries, Joe Richman has sought to give those with very little voice in society a voice.

So it's not at all surprising that Richman was drawn to the extraordinary life and times of a man who gave voice to an entire nation and people--Nelson Mandela. Mandela's story has been often told--from his early and lifelong battles against apartheid to his 27.year imprisonment for treason and his 1994 election as president of a free and racially equal South Africa. But rarely has the story been told so succinctly, with such attention to detail and the use of hard-to-find original sources, as in Mandela: An Audio History, which won both the DuPont-Columbia Award and the Robert F. Kennedy Award.

With the passing of Mandela in December 2013 at the age of 95, MANDELA: AN AUDIO HISTORY was rebroadcast around the world on NPR, BBC, CBC, and South African radio. Now the documentary has transitioned to the audiobook world with a commemorative edition, including a 32 page photo booklet released by HighBridge Audio in February 2014.

Richman has two major rules for producing an audio documentary. Rule One: Research and more research. "I'm kind of a geek about archives," he admits. In 2003 he traveled to South Africa, planning a short visit to produce a short piece to celebrate the 10th anniversary of Mandela's 1994 election. Richman ended up staying for two years, combing through numerous dusty and ignored court, prison, and public and private audio collections of Mandela's speeches and interviews.

In the basement of the South African Broadcasting Corporation, Richman " . . . spent weeks and weeks in that archive finding things that had been lost, mislabeled, and misidentified. One of the tapes was this reel that was completely falling apart, and I had to kind of splice it back together." It was on a plastic Dictabelt recording tape (the ones used by court stenographers) that the entire four-hour speech that Mandela gave at his 1964 treason trial was discovered. The tape had been assumed to have been destroyed by the government and hadn't been heard in 40 years. The speech ended with the words that galvanized a cause and a nation, words that would eventually bring about the collapse of apartheid: "I have cherished the idea of a democratic and free society . . . it is an idea for which I am prepared to die." To hear that statement spoken in Nelson Mandela's soft but defiant South African accent over the crackling courtroom background is truly to feel enveloped in a moment of history.

Rule Two: Skip the narration and let the story tell itself. "My interest is to have the story be as much of an experience as possible. To really put people back into that history. To do that, it requires that the tape sound sort of present tense, not just what happened, but what is happening, so the archival tape is just so wonderful at that," Richman explains.

It was not just recorded voices from eras gone by that Richman found in the archives. A recording of the squeaking gates of Robben Island prison makes an appearance in the documentary. Perhaps the eeriest, most evocative sounds in the entire program are the pealing of distant Johannesburg bells that warned black African workers to leave the whites-only city and return to their townships before dusk. "We were so excited to be using actual bells from that time period," Richman recalls.

Finally, after 100 hours of interviews "with all of those people who sacrificed so much for what they believed in," there was one man Richman had yet to meet--Nelson Mandela. "I've never tried so hard for anything in my life," Richman notes on his Radio Diaries blog site. After more than a year, Richman suddenly received a phone call and was treated to a lunch with Mandela and his family and an exclusive interview. It was a highlight of his career.

All that was left to do was to spend meticulous hours editing the final program and then move on to give voice to the next voice that needs to speak out. In this case, Richman is headed back to South Africa to document the strengths and struggles of just a few of the five million people diagnosed with HIV and AIDS in that country.--Brian Price [Apr/May 2014]