"Bogle writes, he says, because he has something to say, whether it’s to the everyday investor or to the nation’s economic and financial leaders." 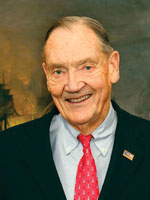 A career as an author is not something John C. Bogle ever envisioned.

In his first and primary career as an investment specialist, he founded the Vanguard Group and created the first index mutual fund.

But now he enjoys as much national prominence for his writing as for his financial career. “If you’d told me 20 years ago that in 20 years I would write seven books, I would have said you were stark, staring mad,” Bogle says with the self-deprecating laugh that often spices his remarks. “I was having breakfast the other day in a hotel with a friend of mine, and a man came over with my book Enough in his hand. It was a real thrill.” But literary-rock-star status is not what Bogle is seeking when he writes. He writes, he says, because he has something to say, whether it’s to the everyday investor or to the nation’s economic and financial leaders.

ENOUGH grew out of a commencement address Bogle delivered in 2007. And the genesis for that grew out of a conversation between Kurt Vonnegut and his friend Joseph Heller. They were at a party thrown by a hedge fund manager, and Vonnegut observed that the host had probably earned more money in a single day than Heller ever did for his book CATCH-22. Heller replied, “Yes, but I have something he’ll never have . . . enough.”

Bogle’s book explores the question of what is enough with respect to financial markets, particularly the concept that financial fund managers don’t really create anything and only draw money out of the system, to the detriment of small investors and the economy as a whole. “I write because I think I have something to say,” Bogle says, “and I know that I say it not from the perspective of an academic or a think tank or someone with an agenda, but from the perspective of someone who knows this business intimately after 58 years of experience.”

Bogle is hopeful that the message of the book will reach the right ears. “It’s amazing how much listening it’s getting. As I said to someone, if you read pages 240 to 245--which asks ‘What is enough for America?’--it would be easy to argue that President Obama used that as the inspiration for his inaugural speech. He, of course, did not. But the fact of the matter is I share his concerns--or maybe, given the sequence--he shares my concerns.”

Bogle narrates the autobiographical opening chapter to his book and the personal closing chapter. While not an audiobook listener himself, Bogle believes his work translates well to audio. “I still have people I know, classmates from Princeton, who say that when they read me, they can hear me speaking. So I guess that’s a way of saying I only have a single voice and that my writing is, in fact, my voice."

“I really enjoyed recording the beginning and the end of the book, using my voice for my voice. I’ve been told by more than one person that I ought to be a radio announcer. So I was really happy to do it, and I think it gives the recorded version of the book maybe a little more veracity or a little more color.”--Richard C. Gotshall