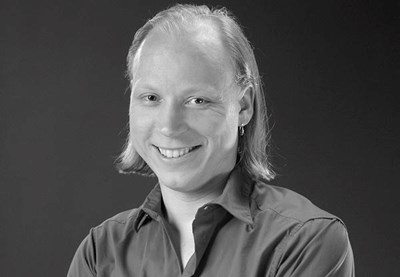 "I think there are pluses and minuses to both [print and audio] formats. My solution: Buy both!"

Shakespeare may have been "a poor player who struts and frets his hour upon the stage," but he was no poet. Not according to New England journalist Mark Anderson. He contends that a profligate nobleman wrote the plays and poems attributed to the so-called Bard of Avon. Facts for his book on the subject, "SHAKESPEARE” BY ANOTHER NAME, now a HighBridge audio, took him a decade to unearth.

"In the summer of 1993," he explains, "I learned that a group of mostly outsider scholars had been working for several generations on the theory that Edward de Vere, Earl of Oxford, was the man behind the 'Shakespeare' mask. Like anyone fresh to this subject, I was skeptical. But the more I researched and the more I read, the more pieces of the puzzle began to fall into place."

A courtier and dilettante poet, the rascally Earl (1550-1604) has been called an egotist, thug, sodomite, atheist, vulture, traitor, murderer, rapist, pederast, adulterer, and numerous other epithets of notoriety. His sins make his biography fascinating whether one believes Anderson's thesis or not--though Anderson himself believes firmly.

"The plays and poems of Shakespeare are an autobiographical canon of writings," he contends. "The author [i.e., de Vere] is consistently telling his own story and the story of the people around him. However, because the author was also something of a loudmouth and malcontent, he often ended up writing very unflattering things about people. This was a big, big problem because the people around him were the queen and some of the most powerful people in the land.

"So imagine yourself in his shoes. What to do? He resorted to a method similar to what blacklisted screenwriters did in 1950s' Hollywood to solve an analogous problem; he hired a front man or front men. The downside is that the person who wrote the works loses the recognition that is his due. To get a taste of how that downside feels, read Shakespeare's Sonnets 71 and 72. But the upside is that at least the works themselves are preserved for future generations to enjoy and appreciate."

In addition to the HighBridge audio of his book, Anderson has posted downloadable MP3 audios on his Web site (www.shakespearebyanothername.com). The "podcasts" and the audiobook are two separate things, he notes. "The Highbridge audiobook is the real deal. It's the 10-hour abridged audio reading of my book. The 10-20 minute podcasts that I've produced are more like short films--providing the platform for a discussion of particular elements of the story, such as the many ways that de Vere's life is reflected in the play HAMLET or how the theme of overpowering marital jealousy in de Vere's life becomes incorporated in surprising ways throughout the Shakespeare canon."

For the full story, does the author recommend the print version or the recording?
"I think there are pluses and minuses to both formats. My solution: Buy both!"--Yuri Rasovsky