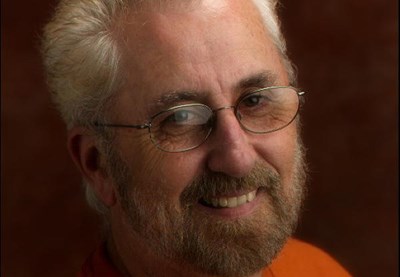 "I’m tired of hearing my voice, and I was looking forward to experiencing the book from a fresh perspective. It was the right choice on my part. It’s very satisfying to listen to my sentences.”

Michael C. Keith of Boston College writes mostly about the subject he lectures on, broadcast media—especially radio. Autobiography is a departure for him. As he says, “I knew I had a very different story about childhood to tell” when he decided to pen a memoir, the recently released THE NEXT BETTER PLACE. And he was right. Staring in 1959 at the age of 11, he ventured forth upon a nomadic, picaresque existence across the U.S. with his penniless, irresponsible, and alcoholic father.

The great radio dramatist/journalist Norman Corwin calls it “a marvel of a book. At once an unparalleled travelogue, a pageant of characters and characterization, a history of father and son totally apart from anything ever written.”

“I felt my story had something of genuine value to say,” Keith told AUDIOFILE. “I’d never encountered anyone who had experienced life as I did as a child. It was also a catharsis and a way of coming to terms with some issues stemming from my bizarre relationship with my father. There were many sad as well as funny incidents, which I felt would be interesting to people. Besides, I’ve always aspired to writing creative nonfiction, so I suppose it was inevitable that I’d tell this story someday.”

He tells it with such minute novelistic detail as to stretch credibility. “There is some elaboration,” Keith admitted, “but I relied mostly on what still exists in my memory banks. These things truly happened and never really left me. It probably remains so fully intact because it was so unconventional and weird. It’s as if I knew one day I’d put them to good use, so they stuck around.

“Of course,” he continued, “a memoir is a combination of memory and imagination, so some things had to be reconstructed because recall, especially in middle age, can be a bit sketchy, if not downright unreliable. That is, when it comes to names and locations, I’ve had to improvise a little. However, the general experiences depicted are quite accurate.”

With all his own vast experience behind the microphone and in front of audiences, why didn’t he narrate the audiobook version himself? “Despite my many years as a radio announcer, I think audiobook narration is a very different thing. First and foremost, it requires an actor’s sensibility and talent. For example, I could never have done the wonderful job that Oliver [Wyman] did with the characterizations. Furthermore, I wanted to hear the book performed by somebody else. I’m tired of hearing my voice, and I was looking forward to experiencing the book from a fresh perspective. It was the right choice on my part. It’s very satisfying to listen to my sentences.”

It is not only his own sentences that he enjoys listening to. “I was always a fan of old and new radio dramas,” Keith told us, “so it was a natural move to audiobooks because they also rely on the spoken word. I can activate the ‘theater of the mind,’ as Stephen Vincent Benet called early radio dramas, and that’s a good mental exercise. I love how engaging audiobooks can be on a long car ride or on a congested commute. They make the time fly.”—Yuri Rasovsky