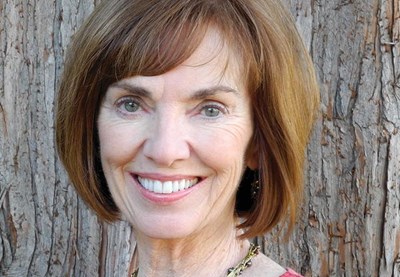 “Audiobooks fall into a lovely little place between theater and reading to oneself that’s uniquely engaging.” 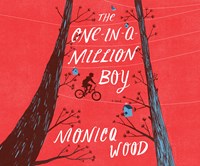 Monica Wood so loves the spoken word that the Portland, Maine, launch party for her most recent novel, THE ONE-IN-A-MILLION BOY, featured four actors on a theater stage reading excerpts from the book. The reading lasted an hour and received a standing ovation. Truth be told, Wood and the rest of the audience would have been perfectly happy to sit back down after the applause and continue listening to the magic created by mixing word with performance.

“A live reading falls into a lovely little place between theater and reading to oneself that’s uniquely engaging,” says Wood. “The same is true for audiobooks.”

Given that attitude, we may as well say up front that Monica Wood has never listened to an entire audiobook. “It’s not that I have anything against them! Really not,” she hastens to reassure. “It’s just that I’m not a great driver in the most auspicious circumstances, and I would be a menace if I were listening to a book. I wouldn’t follow the bend in the road, I would follow the bend in the plot.”

So, even though she’s thrilled that ONE-IN-A-MILLION BOY has been made into an audiobook, she has limited her listening to checking the voice of narrator Chris Cuilla by clicking on website links to other books he’s narrated. She loves the quality of his voice and thinks he sounds “really good.”

Despite not listening to audiobooks, Wood actually narrated her much-lauded memoir, WHEN WE WERE THE KENNEDYS. After auditioning for the job--“I felt that for a memoir it was important for listeners to hear the author’s voice”--she asked several actor friends how to prepare. “They gave me a list of things not to eat or drink beforehand, told me to clear my calendar because it was going to take longer than I thought, and said that I would be completely and totally exhausted. I thought, ‘That can’t be right,’” she laughs before adding, “Well, I was a zombie at the end of the first day!”

In the end, she says, giving a lot of credit to producer Bill Dufris, “It was fun and worked out well, but I had zero interest in asking to narrate one of my novels. Leave that to the professionals.”

With a microphone or not, Wood reads aloud everything she writes as it’s being developed. “You catch inclemencies of expression that run right by your eyes. And now that novels are increasingly meant to be heard as well as read, it’s very important to say the words out loud.” She chuckles, “Every cat I have ever had knows the drill. There’s a certain rustle of paper, a certain getting ready, and they kind of perk up. I had one who was a total loser and would stay asleep, but most of them will listen. I read them everything. It’s nice to have a completely forgiving and uncritical audience.”

Wood’s other important audience is her husband, Dan, whom she credits with rescuing the manuscript for THE ONE-IN-A-MILLION BOY after she had abandoned it and encouraging her to start again by reading it aloud to her. Without hearing this most personal audiobook, she might never have begun work on it again.

The novel is a moving and unusual story of friendship between Ona, a 104-yearold Lithuanian immigrant, a list-loving 11-year-old boy, and the boy’s 42-year-old guitarist father. When the book begins, the boy is dead. We learn the story of the overlapping individual friendships in a mix of flashback and present-day interview transcripts and lists. “The first person to arrive in my mind was Ona, who interested me from the beginning. I felt that if you’re dealing with that long a life, there’s a lot of material there. And then came the friendships. I kept coming back to the idea of writing about cross-generational friendship, which seemed unlikely, yet felt so true.”

The book has clearly struck a popular nerve. It’s climbing the bestseller lists in England and the United States and has been nominated for several awards, all of which delights Wood.

“’The story of your life never starts at the beginning.’ That line from the book came to me very late in the writing process, but in a way, it sums up the whole novel. I had to write most of the book to figure out what it was about.”

And that may be what it’s all about for each of us. As Wood says, “The story of your life might start at a place you haven’t even gotten to yet.”--Aurelia C. Scott