"I think the best things that kids can learn to do is to ask good questions. I'd like to inspire their curiosity." 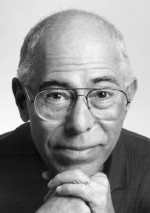 Mordicai Gerstein always wanted to be a painter. "It wasn't until after I had illustrated a few picture books with writer Elizabeth Levy that I started working on writing, and after about 10 years, I published my first book--my first 'written and illustrated by.'"

Although initially a visual artist, Gerstein writes for the ear. "I think of that as 'oral'--the way the story would be spoken. I want that kind of voice." He's currently at work on a retelling of a Jewish legend called "Midrash." "I'm using the characters, sidelights, and details of the stories that we know from the Old Testament. Those stories are inspired by the classical biblical prose, which has a wonderful rhythm to it. Its simplicity and its repetitions come out of the oral tradition, stories that were probably sung before being written."

Gerstein admits he hadn't had much contact with audiobooks until he started working with Live Oak. "I love what they do--the combination of being read to and looking at the pictures." Gerstein believes audiobooks are a great tool for learning to read. In a way, that's how he learned to read. "My parents would read to me until I had memorized all the text, and then I'd go through--I'm talking about picture books--and point to the different words and find them." The 2004 Caldecott Medal winner and author of over 30 books for children and young adults has recorded only two so far. "Recording them," he says, "was really a joy, because I know just how I want my works read, so I've been very happy with what I've been able to do." He is particularly pleased with the Charles Ives book (WHAT CHARLIE HEARD). "That book is about sound, all kinds of sounds, and music." Now that the book is available on CD, he feels that it's complete--"because there's an audio component."

Gerstein writes about the things he finds "beautiful, amazing, and fascinating. I want to convey that wonder, that fascination, that intriguing aspect." He wants his books to provoke questions. "I think the best things that kids can learn to do is to ask good questions. I'd like to inspire their curiosity. 'Why did this person do this?' 'What does this picture mean?' 'Why did they say that?' I'm not looking to give them answers. I think the questions are much more valuable."--S.J. Henschel