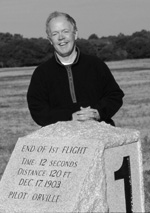 One might expect an experienced radio journalist to make an easy transition to audiobook reader.

Not so, says Noah Adams, longtime host of "All Things Considered" and a correspondent for National Public Radio. "It's not radio," he says emphatically. "It's got nothing to do with radio. In fact, everything I learned for radio no longer applies."

-You can't move your head when you read. You must hold it still. -You can't move around. If your clothes make noise, you have to re-record a passage.

Adams quickly credits Lewis Milgrom, producer of Adams's latest book, THE FLYERS. "He's got great ears," Adams says with a chuckle that reflects respect, not humor. For instance, he says Milgrom one day looked at Adams when he showed up to record: "You're not going to wear that," Adams remembers Milgrom saying as he pointed at Adams's shirt. "That'll rustle, and the sound will show up on the tape." So Adams changed it and proceeded with another of the three 6-hour days it took to record his book about the Wright brothers.

Radio has been described as a "cool" medium, in that it engages readers more than television. Adams says audiobooks are even more intimate than radio. But Adams says the producer again guided his performance as reader.

"In radio, there's a lot of inflection," Adams says. "But he said, 'Pull back. Don't let your voice rise and fall so much.'

"But if he came in to do a radio thing, I'd tell him what to change. It's amazing how different it is."

Adams does admit he was comfortable with the technology of the recording studio. Even then, though, he was impressed with the talents of the technical crew. He says the recording engineers were listening while he read and picked up errors or miscues that went past the reader and the producer. "They were listening for more than the technical quality of the sound. I was really impressed."

THE FLYERS is subtitled "In Search of Wilbur & Orville Wright." Adams says the form of the book grew out of his research. He said he knew he wanted to write a book to commemorate the 100th anniversary of the first flight. "I was going to focus just on 1903. But then right away I realized the real story was what happened after 1903. Then I thought, 'How am I going to tell this story?'

"So I decided to do what I do in radio, which is go places and talk to people."

The story moves along effortlessly, or so it seems to the listener. But it took a lot of work to make it seem so easy. "You have to work on a piece and work on a piece to get it right. . . I've never been more tired than in those sessions."--Richard C. Gotshall