"Elements of the autobiographies wake up pain and sorrow. Saying words to the audience makes emotions more alive, and for better or for worse, we re-feel what happens. Happy memories glow, regrets are very difficult to say." 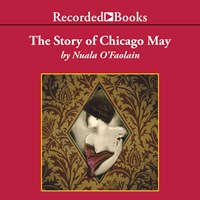 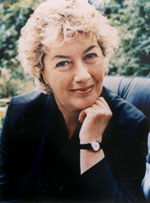 Sharing the good news of middle age is Nuala O'Faolain's purpose in her new memoir, Almost There. It's meant to be a celebration of life. She says, "I hope that listeners hear through the Irish accent to the universal story of potential and happiness in the middle years." A work of passion and optimism, this is the second autobiographical work O'Faolain has recorded; the first was Are You Somebody? Although she doesn't listen to audiobooks--"I've never made it a habit," she says--she thinks it's important for listeners to hear the author's voice.

When O'Faolain records her books, she often breaks down in tears. "Elements of the autobiographies wake up pain and sorrow. Saying words to the audience makes emotions more alive, and for better or for worse, we re-feel what happens. Happy memories glow, regrets are very difficult to say." When she recorded her first memoir, she had to deal again with her mother's death. "I had to try over and over to say the words," she says. She equates recording books to her teaching experience. Before going into the classroom she had to practice reading so that she would "grow a skin over the words." She would cry at the end of Shakespeare's The Tempest and the beginning of Donne's "Death Be Not Proud." "I made a fool of myself weeping," she says. "The act of articulating wakes up emotional power."

Living HistoryO'Faolain has never been through therapy or psychoanalysis; she finds herself through writing. "I never knew I had a problem with my mother," she says. It wasn't until she wrote her memoirs that she understood that many of the circumstances and vices of her life came from that relationship. "I moved through life like everyone else," she says, "encountering one accident after another." But, she says, she is "lucky enough to have written a memoir." And through her writing she finds herself asking, "Why the hell did that happen?" But knows she will "never know."

O'Faolain is now back at the artists' colony of Yaddo in New York writing her next novel and hopes that the place will bring her luck, as it is where she wrote My Dream of You. "The best thing about writing as an occupation," she says, "is that you can work anywhere." Although her new book does not yet have a title, and she will not reveal the plot, she wants the book to become one that "whoever reads it wants to turn the page."--Denise L. Marchionda