"You owe that author your absolute and complete fealty while you’re [narrating]. You don’t comment on anything. You just do it. You just enjoy it. It’s very, very satisfying—a sweet way to spend your time.” 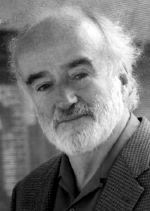 Ron McLarty has had a charmed career as a character actor across the years—vaulting from stage to screen to TV to commercials (once as a cold capsule) and voice-overs (as the Berenstains’ Papa Bear) to audiobook narrator, all while raising a family as well.

What eluded him, though, was a siren song for his other muse—writing.

Then, through a chance meeting, this author of 10 unpublished novels—written through college and the Army and acting gigs—broke into print. His 2004 debut, THE MEMORY OF RUNNING, was critically acclaimed. Now TRAVELER, a deeply affectionate glimpse at a post-WWII working-class immigrant environment, with the characters’ lives haunted by a mystery, is winning additional fans.

McLarty was just wrapping up “the worst audition I ever gave” one day in 2003, for a part in a TV miniseries based on Stephen King’s Kingdom Hospital. As it happened, the horrormeister was there, and as the actor left, he felt a tap on his arm and heard the words, “You’re Ron McLarty, the novelist, aren’t you?”
It seems that McLarty, who’d frequently narrated audiobooks by writers ranging from Richard Russo to Danielle Steel (“I get more out of reading a book out loud than I do reading it to myself”), had cajoled his publisher, Recorded Books, into letting him record one of those unpublished tales. King had seen a list of titles that included that book but hadn’t heard the audio itself.

“Nobody had ever called me a novelist before,” McLarty remembers. Immediately, he called Recorded Books and arranged for discs to be shipped to King. Within weeks King called THE MEMORY OF RUNNING “the best book you can’t read.” An auction, a two-book deal, and a Hollywood option soon came roaring along.
TRAVELER’s protagonist, Jono Riley, is an actor when he can get a gig in the not-for-profit theater world, and a bartender when he can’t. Circumstances from his childhood in East Providence, RI, propel him back to that world, where Italians and Irish and Portuguese kids mixed it up and meshed into a kind of community. Once it was McLarty’s world as well, and he remembers it lovingly.

McLarty continues to narrate audiobooks. He rarely turns down a bid. “It’s commerce—a job. And you owe that author your absolute and complete fealty while you’re doing it. You don’t comment on anything. You just do it. You just enjoy it. It’s very, very satisfying—a sweet way to spend your time.”

He recounts a moment during a visit to his hometown for a book reading a year ago. “This little woman stood up—and she was shorter than the chair. She said, ‘Ronny, do you remember me?’ I said, ‘Sure, you were my kindergarten teacher.’ Of course, I remembered her as a tall woman. ‘I gave you your first break,’ she said. ‘I gave you the lead in “The Little Red Hen”!’”—Michael J. Bandler
JUN/JUL 07
© AudioFile 2007, Portland, Maine