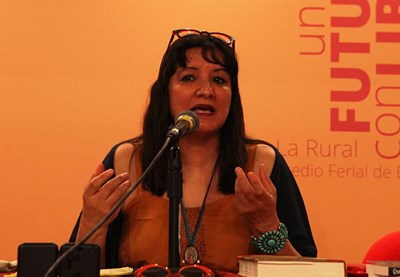 "Cisneros notes that not all authors will be good narrators, but she still feels strongly that 'you find out something about the author just in the way that she expresses herself.' ”

Sandra Cisneros is not only the award-winning author of two novels, countless essays, and poetry, she’s also the narrator of her own work on audio. A devoted audiobook listener, Cisneros prefers hearing authors narrate their own work. “I like to hear the writer. I feel angry when I find the narrator isn’t the person who wrote the work. Even in fiction.” She notes that not all authors will be good narrators, but she still feels strongly that “you find out something about the author just in the way that she expresses herself.”

Cisneros has no formal acting training, but she loves to perform. “It takes me a few seconds to get used to hearing my voice, but I like performing my own work.” She learned some of what she knows about performing by watching Jerry Mathis, a professor of oral interpretation. He taught her that when she’s reading to an audience, to “remember where I was when I started writing a piece, when my pen just started scratching the paper, what state of mind I was in when I began it, not when I ended it.”

When she’s about to record, Cisneros sees and hears her characters in her mind. “I can’t always reproduce them, but I hear them.” She had a lot of fun recording her most recent book, CARAMELO. Cisneros says she wishes she could have done one character who has a voice like squeezed lemons. “I couldn’t do it because, of course, I’m not an actress, so I didn’t try.” If she hadn’t done the reading herself, she would have wanted someone like Charo to do the woman with the sour voice.

Producer Rick Harris gave her some valuable hints to make performing easier. “Some actors put their hand on a certain part of their body to remind themselves that they’re a certain person. And that helped for me.” When she was the Awful Grandmother, she put her hand on her heart, as if she was offended. “But if I was Regina, then I put my hand on my hip, and I talked in a very different way.” One of the engineers helped her with the more difficult indigenous pronunciations. She can rattle off the correct pronunciation of Popocatapetl.

Cisneros knows that hearing a book like hers on audio is better for some. In the handheld text, “if you’re not bilingual or multilingual, you have to jump over words without listening to the language. I wrote this as a poet, and I want people to hear every syllable.” —S.J. Henschel