“It’s a wonderful way to get information, to rest the eyes, and it’s great for people who don’t like to read print. Audio brings in new people for an author.” 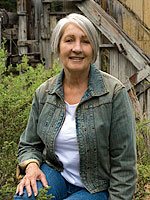 As her readers may suspect from the quilting scenes in her books, Sandra Dallas is a quilting fan. But she hasn’t practiced the skill in years and says she never was an accomplished quilter. Her appreciation is for quilting as an art form.

“[Traditionally], women were not encouraged to be artists in the formal sense so they put art into everyday things,” she says. “Quilting was a great artistic and bonding outlet for women in the past.” It’s not uncommon for 21st-century quilters to combine stitching and enjoying audiobooks. But Dallas’s books aren’t focused on handmade blankets; they wrap meaty content and serious issues into spellbinding stories.

Just as she weaves sewing into her novels, the author of 10 nonfiction works incorporates history, especially Colorado lore. A lifelong history buff, she’s lived in the Centennial State since girlhood, absorbing the rich culture. “I use my background and talk with people to research my books. I like to visit a place and soak up the atmosphere.” PRAYERS FOR SALE, for example, is located in a gold-dredging town inspired by Breckenridge, where Dallas lived in the 1960s. Although the dredging days were past, she tucked away memories shared by longtime residents.

The author considers audiobooks essential for cross-country car trips. She recently dove into Jack Kerouac’s ON THE ROAD for a journey to Utah. She also enjoys Tony Hillerman mysteries. “I’m excited about audio; it’s a whole new outlet.” Dallas adds, “It’s a wonderful way to get information, to rest the eyes, and it’s great for people who don’t like to read print. Audio brings in new people for an author.”

That certainly was the case with TALLGRASS, which won the 2008 Audie Award for fiction; its narrator, Lorelei King, took the female solo narration honors. Dallas finds listening to her works as interpreted by others an interesting experience. “Those characters have a way of speaking in my mind, and I have to adjust to the new voice, but maybe the narrator is right. It’s like someone talking about you in third person.” She’s heard a sampling of PRAYERS FOR SALE and finds Maggi-Meg Reed’s characterization of the elderly Hennie quite believable.

The author of THE DIARY OF MATTIE SPENSER, NEW MERCIES, and THE PERSIAN PICKLE CLUB says her plots just hit her. “I have to wait for James Michener’s ‘magical moment.’” But as a longtime journalist, she doesn’t fall victim to writer’s block, a certain shortcut to a pink slip for a reporter. She writes one page almost every day, first editing the prior day’s output. “But, of course, I’m always writing and editing in my head.”

Dallas’s WHITER THAN SNOW, set during a 1920 avalanche in a mountain town, hits bookshelves next year. “It has all the things I like in it: mountains, the Civil War, and women--so it was fun to write.”--Jenan Jones Benson