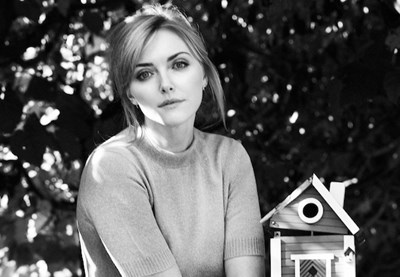 "Madame Badobedah and Mabel had such strong voices in my head, as did their geography, so it was a joy to make it all real!" 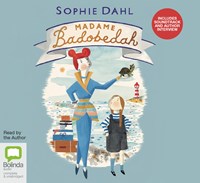 For Sophie Dahl, the British author and actor--and granddaughter of renowned author Roald Dahl--there was no question that she would narrate her first children’s book, MADAME BADOBEDAH, an enchanting and imaginative story for young listeners. “My characters’ voices have been in my head since the beginning--I couldn’t really imagine someone else doing it. Plus, I got the added bonus of creating the rowdy sea chantey and doing drunken pirate sound effects.” Dahl got her wish and created an audiobook that earned a spot as a finalist in the 2020 Audie Awards.

Mabel, the story’s bold, young protagonist and self-proclaimed adventurer, lives in the Mermaid Hotel by the sea. Though the B&B is owned by her parents, she is the keeper of all its secrets. Mabel’s life changes when an enigmatic older woman strolls in with a giant pile of bags for herself and her numerous pets and starts bossing Mabel around. Mabel is suspicious and dubs her “Madame Badobedah, rhymes with ooh-la-la,” imagining her a villain--an international jewel thief!--worthy of immediate scrutiny. Mabel becomes a spy, lurking outside doors and quietly observing everything. Madame Badobedah catches her snooping and invites her in for tea. Mabel is wary at first, but then the two embark on imaginative adventures. Madame Badobedah is a beautifully illustrated picture book, and the audiobook features Dahl’s skilled narration, perfectly coordinated music, and rich sound effects to create a sense of place for the mysterious Mermaid Hotel. Listeners will get a deeper connection to the story’s main characters, and the joy that can come from intergenerational friendships and found family.

When asked about getting to record the audiobook, Dahl says, “I love listening to audiobooks, but also I love reading stories aloud, so it was a chance to merge the two, using my own story. Madame Badobedah and Mabel had such strong voices in my head, as did their geography, so it was a joy to make it all real!” About the recording process itself, Dahl says, “It was surprisingly quick, over and done within an hour, which was slightly heartbreaking as I could happily sit in a soundproof room for hours!” Of course, the narration is only part of what makes this such a magical listen. Crinkling candy wrappers, wailing sirens, creaking stairs, bright piano music, and more sound effects pepper the story, without overwhelming listeners. “I was lucky enough to have an amazing sound engineer and producer who totally had the same vision of how the story would feel on audio,” she says. “There was a sense of mystery and melancholy pervading throughout, but also, humor was at its heart.”

Mabel’s voice is simply Dahl’s own. “Mabel is such a nosy parker, and very definite, and I really wanted that to come through in the sound around her asides and observations.” Young listeners will certainly identify with the curious Mabel and will likewise long for an adventurous companion willing to peer deep into closets and discover imaginary grottos full of mermaids. Dahl says she didn’t want Madame Badobedah’s voice to frighten young listeners, but to give the sense that she’s someone who has a potential for magic. The enigmatic older woman’s voice is inspired by both Dahl’s grandmother from Knoxville, Tennessee-- American actress Patricia Neal--and her husband’s grandmother from Eastern Europe. Dahl explains that Madame Badobedah is aloof and imperious at first, with a growly, scratchy voice that gradually becomes warmer as she and Mabel begin to earn each other’s trust.

There are two bonuses to listening to MADAME BADOBEDAH as an audiobook. An author interview at the end of the production gives a peek into Dahl’s storytelling process and her literary inspirations. Something that will appeal even more to young listeners, however, is a rousing original song sung by Dahl and written with her husband, Jamie Cullum. “I asked him whether he would have a go at doing a melody for the audiobook, and as we sat at the piano, he wrote this wonderful very soulful, mournful melody. We then wrote the words together, around the melody, which was less soulful and mournful because we laughed a lot, and it turned into chaos when we added pirate noises.” The melody and that sense of fun are found throughout the audiobook, making the jump into the full song at the end all the more delightful.--Emily E. Connelly