“The physical act of reading is bad because it leads to reading other things. Whereas listening to an audiobook is like watching my show with your eyes closed, and that’s okay.” 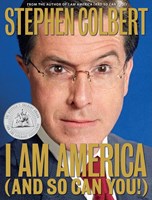 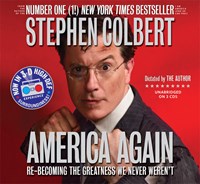 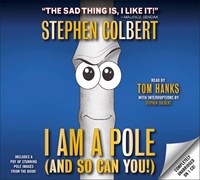 It’s impossible to get Stephen Colbert to talk much about audiobooks. He wants to talk about himself instead. This would be in horrid taste if Stephen Colbert were himself, but he’s not. Or is he?

“I’m sexy. This isn’t ego talking,” he wrote for PEOPLE magazine. “PEOPLE says I’m sexy, and I accept that. Who am I to argue? I’m just a person. They’re PEOPLE.”

He’s kidding, of course, just as he was kidding when he stood within 30 feet of George W. Bush and praised the President of the United States so outrageously that it became the verbal equivalent of a waterboarding. “The greatest thing about this man is he’s steady,” said Colbert, in one of many coruscating remarks. “You know where he stands. He believes the same thing Wednesday that he believed on Monday, no matter what happened Tuesday.” For those of you who were on Mars--and I understand it’s a fine place to live--this took place at the 2006 White House Correspondents’ Dinner.

“On the page,” Colbert says, “you can’t convey the inflection. Anger or rage? Rage! I’m a huge fan of the sound of my own voice. It’s loud. If you’re just paying for volume alone, you get your money’s worth with this audiobook. Almost the entire book is shouted.”

Asked if he’s ever listened to an audiobook, he says, “I have.”

“And which was that?”

“Have you ever listened to another?”

“My speech at the White House Correspondents’ Dinner was sold as a book on iTunes, and I listened to that.” [The 22-minute performance, which is also for sale at Audible.com, was the most popular audiobook sold on iTunes for a year.]

“Have you ever listened to a book that was not written and also read by you?”

Having graduated from “The Daily Show,” a fake news show, Colbert started “The Colbert Report,” a fake news commentator’s show. He’s dubbed it “the no-fact-zone.” “Reality,” he said during his famous speech, “has a well-known liberal bias.”

Colbert says that he likes audiobooks better than their traditional text-on-page forebears. “The physical act of reading is bad because it leads to reading other things. Whereas listening to an audiobook is like watching my show with your eyes closed, and that’s okay.”

People who want to send money directly to Colbert as well as buy the book and the audiobook are welcome to do so, he says. “That’s 513 West 54th Street, New York, New York. Just send a check to cash. Put this in the article,” he tells me.

“What about people who don’t want to send him money or even buy the book?” I ask.