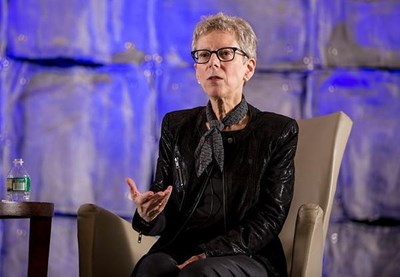 “It’s interesting to hear actors in an interview because usually we hear terrific lines that were scripted for them, so you want to hear what they sound like when they’re not playing a character."

“I’m so interested in the human voice. My favorite kind of music is singing. On radio, all you have is your voice, so you judge your guests, in a way, not only by what they’re saying but also by how they say it. So people who have a really phony, rehearsed style of speaking don’t come across well.”

“Fresh Air” uses ISDN (Integrated Services Digital Network) telephone lines or satellites as Gross interviews. While it may sound like she’s sitting right across from her subjects, it’s rare that she’s looking them in the eye. She calls it pure radio. “With an actor, it’s always interesting to hear them in an interview because usually when we hear their voice, we hear terrific lines that were scripted for them, so you want to hear what they sound like when they’re not playing a character. The answer is sometimes they don’t sound very good.”

In her fourth collection of interviews available on CD, FRESH AIR: STARS, Gross again turns her attention to gifted artists who most people would agree are “stars.”

“Because we’ve put out several collections on stage and screen (LAUGHS, WRITERS SPEAK, BEST OF STAGE AND SCREEN), this is basically an update of our previous collections. So we were working with the people we hadn’t already anthologized. We chose from the TV- and movie-related interviews we had, and we came up with a title that does not perfectly describe [laughs] the contents.”

“Artists are born with some kind of gift. Everything that happened in their life, particularly in their formative years, shapes that gift. I want to know what created that sensibility, which requires asking some personal questions, but my goal isn’t to have a headline based on something that’s going to embarrass them.”

Once in an interview with George Clooney, the Oscar-winning actor revealed that an on-set injury on the film Syriana resulted in excruciating headaches. Gross asked him if the pain was so bad that he might have considered suicide. When Clooney agreed, a tabloid journalist wrote a story that implied the actor was suicidal when, in fact, he wasn’t. Gross wasn’t happy, but she knows it’s part of the territory.

“Some people are very private about their lives, but other people genuinely like to use their lives as an opportunity for public introspection. That’s one of the reasons I feel that as an interviewer you have to have a flexible style of interviewing and have your questions reflect the person you’re talking to and what their comfort level is regarding privacy.”

And what about the times when Gross is a fan of an artist’s work?

“I learned the hard way that there’s a certain level of awe that interferes with the interview. Your interviewee wants to feel that they’re in the hands of a professional who can do their job--ask the questions and show their appreciation for the person’s work.”--Randy O’Brien

Photo taken at ComNet14 by Tmohabir