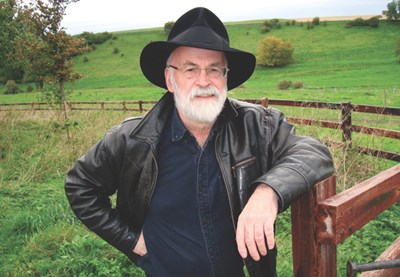 "The experiences of reading and listening overlap." 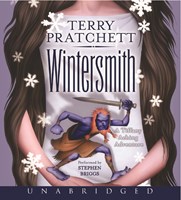 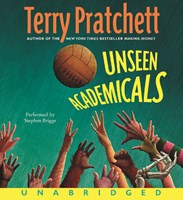 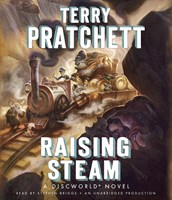 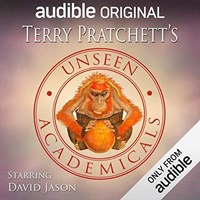 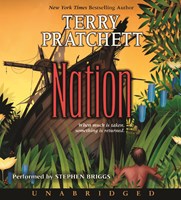 We are saddened that Terry Pratchett passed away in March 2015.

Nine-year-old witches with first sight and second thoughts, luggage that travels by itself, and six-foot dwarfs--these are are just a few of the delightful characters that inhabit Terry Pratchett's long-running Discworld series--a wondrous universe that combines the trappings of fantasy (wizards, dragons, elves, etc.) with some of the wittiest, silliest, most penetrating satire being written today.

Picture a head-on collision between Tolkien and Monty Python.

Pratchett's works have sold more than 40 million copies worldwide and have been translated into 33 languages. In 2003 in his native Great Britain, Pratchett alone accounted for 3.4% of fiction sales (second only to J.K. Rowling), and he has collected his fair share of awards: an OBE (Officer of the British Empire), presented by Prince Charles for "services to literature" in 1998, a Carnegie Award for Children's Literature in 2002, and an Audie Award for best Science Fiction in 2004.

"A fan told me recently that he sometimes hopes he gets caught in traffic, just so he can keep listening. Made me feel wonderful," Pratchett says. He sees the audiobook market only getting larger and admits he now carries a few extra permanent ink pens to book-signing events because he's often asked to sign as many CD boxes as book jackets. He also believes that many people are buying both the book and audiobook of the same title. "The experiences of reading and listening overlap."

With scores of characters, dozens of over-the-top (mostly from somewhere around the British Isles) accents, ridiculous puns, almost impossible to pronounce place names, and a demand for theatrical timing, would Pratchett ever consider reading one of his own audiobooks? "I've got a voice for mime," he quips.

He has nothing but praise for friend and narrator Stephen Briggs. "Stephen acts the novels. Discworld books are very dialogue driven, and pace change and tonal change are very important. It's a performance." Having adapted 14 Discworld novels for the stage and collaborated with Pratchett on a number of Discworld maps, lists, and compendiums, Briggs has an encyclopedic familiarity with the material that few narrators can match. "He's got a card file," says Pratchett, who now and again calls Briggs when he can't remember which character did what in which novel.

Although the Discworld universe has spawned a lively and sizeable multimedia empire that includes television and BBC Radio adaptations, graphic novels, role-play and board games (including Thud!), Pratchett remains close to the camaraderie of fan-based Web sites, newsgroups, and science fiction conventions. He appreciates the busy, open atmosphere of the "cons," as conventions are called--places where "there's room for Spock ears and literature."Pratchett enjoys audiobooks read by their authors. He feels he gets a little insight into the writer's thinking. One gets the feeling that Pratchett is constantly collecting insights and somewhere down the line they'll show up in a novel. At 57 he has no interest in "slowing down" and plans to continue producing at least a book a year for the foreseeable future.

"I love to write," says Pratchett, concluding our interview. Much to the delight of his legion of fans, he's eager to get back to work.--Brian Price