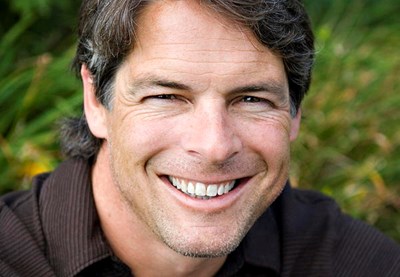 "Author Tim Green is a former professional football player, lawyer, bestselling writer of books for adults and children, and narrator of his own audiobooks." 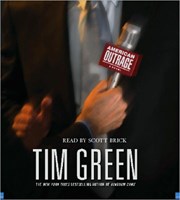 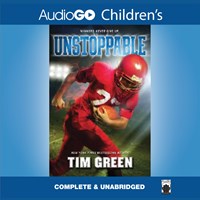 Author Tim Green is a triple threat and then some: former professional football player, lawyer, bestselling writer of books for adults and children, and narrator of his own audiobooks. Green’s 15-year-old son, Troy, and 11-year-old daughter, Tate, voice central characters in a full-cast production of his novel for children, FOOTBALL GENIUS, and Green himself narrates deftly among the almost two dozen other cast members. He goes solo with the audiobook of BASEBALL GREAT, to great effect: “As narrator, Tim Green breathes life and depth into the characters of this story, leaving an indelible impression.” -2009

To call Tim Green a jack-of-all-trades doesn’t even come close to the truth.

The 45-year-old author has had the opportunity to try--and excel at--a host of creative endeavors. To label him in any one way doesn’t do justice to his pursuits. He played eight years of professional football, went to law school, and served as a TV commentator. Throughout his life, he has been a prolific writer and reader.

“I’m in the habit of being busy, being productive,” says the father of five. “Every day is different, and writing is an important part of every day.”

He has written fiction (often involving football, the law, and suspense), young adult, and nonfiction books. A recent children’s title, FOOTBALL GENIUS, features a full-cast recording that includes Green and two of his children. “I imagined the characters in the images of my kids,” he says. “The kids took to it pretty quick.” His 15-year-old son, Troy, and 11-year-old daughter, Tate, voice central characters in the book, and Green narrates deftly among the almost two dozen other cast members.

Tate, he says, auditioned late. When a coordinator heard her, “they were ready to sign her on the spot.” But not knowing who she was, he asked Green, “How can I get her parents’ permission?” A proud Green replied, “She’s my daughter!”

Green also narrates BASEBALL GREAT, another title for kids that came out this year.

It’s no surprise where his ideas come from: “The kids--my own kids especially--all my observations as a father and coach.” The reservoir of material in kids’ books is a lot more personal, overall. “Writing kids’ books is particularly fun. It’s pure joy.”

While Green keeps no set writing schedule, he fits it in at home in upstate New York or on business trips. His reverence for reading is equaled by his respect for listening. Green often reads to school kids and speaks passionately about the value of stories. Audiobooks can be an essential part of that experience, he says.

“I love them. Sometimes, after hearing one of my books, people kind of apologize and say, ‘Oh, I listened to it.’ I say, ‘You read it!’ It’s the exact same thing--maybe better.”

Green grew up a “voracious” reader and was an English major at Syracuse University. Books, in some form, always remain with him. In his novel Ruffians, the protagonist, football player Clay Blackwell, pulls out a copy of FOR WHOM THE BELL TOLLS while he waits his turn at an NFL scouting camp.