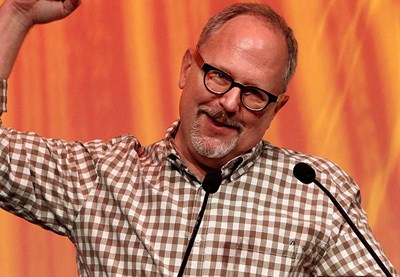 “I saw a series of picture books that revealed a simple version, then a series of novels that would go much deeper into the stories.” 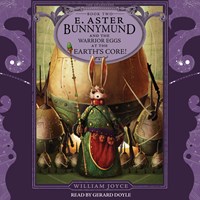 William Joyce published his first book, GEORGE SHRINKS, in 1985, initiating almost 30 years of inviting children and adults into a state of wonder.

Even as a child, Joyce doubted conventional thought and saw clearly the blurred lines between reality and imagination. When his parents told him King Kong’s death wasn’t real, just a story a grown-up made up, he couldn’t separate the reality of TV news from the invention of film. “I thought, ‘They don’t know what they’re talking about.’”

Similarly, Joyce’s youthful picture of Santa Claus and other archetypes was vivid. He saw them as “magnificent, not cute and cuddly. If you’re going to bring toys or eggs to every kid in one night, it’s a big job. You have to be on the ball--a general, a leader! They needed a mix of a gigantic industrial complex and magic to pull things off.”

Remembering and revisioning led to Joyce’s Guardians of Childhood series. In his totally original fashion, the author-illustrator-animator created both picture books and novels about five fantastical luminaries--the Man in the Moon, Santa, the Easter Bunny, the Sandman, and the Tooth Fairy. The idea came to him all at once. “I saw a series of picture books that revealed a simple version, then a series of novels that would go much deeper into the stories; these would be woven together in a way that made sense, at least to me.”

Several of these books have been released in audio versions, which Joyce thinks are very fun. And the symbolic figures have found a new dimension--literally. “The Rise of the Guardians” is a 3-D movie Joyce created in collaboration with DreamWorks. He contacted them because his vision was too big to produce by himself. They were the only studio that allowed him to work on the movie, create all the books, and release them before the movie premiered. He’s been delighted with the results, describing the movie as an “epic, with a delightful escapist surrealist feeling, like the first Star Wars movie.” As executive director, Joyce frequently found that the movie’s development fed the book series. This out-of- the-box thinking extends and deepens the stories in both media.

Joyce’s atypical creative process also led to remarkable results in “The Fantastic Flying Books of Mr. Morris Lessmore.” The project began as a book, but before it was finished, Joyce and those at his Moonbot Studios adapted it into a film, then patterned an iPad app, and last, returned to the book, finishing up the illustrations to complete it.

The story of a confirmed bibliophile won a 2012 Oscar for Best Animated Short. The movie is an homage to film, literature, libraries, and to the resilience of Katrina-devastated inhabitants of Louisiana and Joyce’s mentor, the legendary children’s book advocate, William Morris. The link of film, app, and book provides profound, enriching effects because of their different perspectives. The color and imagery in the film give nods to movies past and bring viewers into the sensory world of fluttering pages. The picture book, which allows readers
to enter Morris’s mind more completely, views him writing daily in a book that records his “joys and sorrows, of all that he knew and everything that he hoped for.” In addition to sweeping statements like this that lend an allegorical tone, the book is a vehicle for Joyce’s whimsical playfulness. As Morris enters his home of books, for example, he hears “the faint chatter of a thousand different stories, as if each book was whispering an invitation to adventure.” Just as Joyce has done for nearly three decades.--Susie Wilde