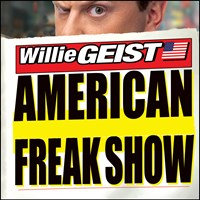 While Willie Geist is best known as the co-host of MSNBC’s “Morning Joe” and NBC’s “Today Show,” he started as a newspaper reporter. He wrote two books of humor before writing GOOD TALK, DAD with his father, the veteran newspaper columnist and Emmy-winning broadcaster Bill Geist. “It was by far the most meaningful book I’ve ever done--a chance for my father and I to sit down and think through all our favorite stories, get them down on paper, and sit with my mom and my wife and laugh through them.”

Like a lot of fathers in his generation, Bill left a lot unsaid while Willie was growing up--about his year in Vietnam, and about his Parkinson’s disease, which he kept from his children for a long time. These and lighter stories from both men showcase humor that is wry and often sarcastic but never sardonic. Both men are remarkably humble with their intellect and talents. “It’s probably just my personality,” says Willie. “My dad’s the same way. I watched the way he lived but also the way he conducted himself professionally. He was very good at what he did, but he just doesn’t try to steal the scene, hog the camera, or boss people around. So I think I take some of that, too, which is to just keep your head down, be good at what you do, work hard, and be well prepared.”

Audio productions of Willie’s first book, AMERICAN FREAK SHOW, and Bill’s 2007 book WAY OFF THE ROAD were narrated by voice pros, but GOOD TALK, DAD is a natural for the authors to read. “The way it’s written is that the whole book is a back-and-forth--a conversation--so it made perfect sense for us to have that conversation and have somebody record it.” Willie says he and his dad felt right at home in the recording studio. “When you’ve written all the material yourself and you know the story so well, it’s easy and fun to wander through it. You know where the emphasis belongs, what the point of the story is. It also helps to have a little experience in this. It’s what my dad and I do for a living, so it wasn’t like landing on another planet when you came to the tracking booth.”

The impetus for GOOD TALK, DAD came from family members and others who have been laughing at the antics of Willie and his father for years. “My dad was kind of the fun-dad guy, so we had a very loose relationship. I think he treated me at a relatively young age almost like an equal in terms of the kind of jokes he’d tell me, the places we’d go, and the things he’d tell me about the world. He was my dad, but we were good friends most of the way.” Their easygoing relationship and lack of pretention made it easy to critique each other’s writing. “We said at the beginning there’s no hard feelings; let’s just make this good. So I would send a chapter, and he’d send it back with big red marks through it. We had no problem doing that.” Bill’s mother, Jody, and wife, Christina, were an important part of the project. “My mother and my wife are our most trusted editors. They’d read through something and say, ‘Uh . . . that’s not as funny as you two think it is,’ or ‘This chapter’s getting a little long, and we don’t need to hear every detail.’ They did a lot of that.”

The authors’ performances are perfect for the humor in these stories, but what will linger for most listeners is the palpable affection and respect both men have for each other. “People come up and tell me how they remember a particular story my dad did 30 years ago or how they met him at a state fair. I just absolutely love that; it makes me proud.” Both are pleased at the commercial success of the book and audio, but Willie’s response is more personal. “At the end of the day, now we have this book of our family stories sitting on a shelf. It will always sit there, and my son and my daughter will read it some day, and, hopefully, their kids will read it and have a sense of who their dad was.”--Thomas Walken