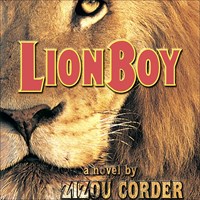 The biggest secret about Zizou Corder, the author of LIONBOY, is that she is actually a lizard. When mother-daughter team Louisa Young and 10-year-old Isabel Adomakoh Young pictured their two names on the cover of their children’s book and audiobook, they thought the combined names would be too long. They turned to their pet lizard, Zizou, attached the last name Corder, and a pseudonym was born.

This is just one example of the spirited collaboration that mother and daughter brought to the creation of their book. LIONBOY, the story of Charlie, who stows away on a circus ship in pursuit of his kidnapped parents, began eight years ago as a bedtime story. Isabel, then 3, asked her mother to make up a story about a naughty boy called Charlie. Telling stories was a regular part of bedtime, as was reading aloud from books by Philip Pullman, Roald Dahl, Edward Eager, and others. One birthday Isabel asked her mother, the author of several adult titles, "Would you make the Charlie stories into a book?" Louisa Young promised she would, if Isabel would help.

The collaboration process gives Louisa constant access to another imagination. They discuss escape routes for lions or names for acrobats. Louisa types up the scenes, Isabel reads them, and they revise together. With the publication of Lionboy in 34 languages, a screenplay in the works, and the recording of both an American and a British audiobook, mother and daughter have had to let go of their creation. "Our finished book is now their raw material, and we have to trust them," Louisa says.

Young Isabel likes to listen to audiobooks; whereas, Louisa likes to “read books for the silence.” They listen to audiobooks together in the car, though, and it was there that they first heard narrator Anton Lesser reading Philip Pullman’s RUBY IN THE SMOKE. Anton Lesser reads the UK audiobook production of LIONBOY at their request, and Simon Jones narrates the American audiobook. After eight years of telling each other stories from LIONBOY, it’s surprising to hear it read by someone else. When Louisa listened to Jones’s version, she found herself wondering what was going to happen next.

Louisa and Isabel are thrilled by the inclusion on the audiobook of music composed by friend Robert Lockhart. They say to pay particular attention to the song that the circus zebras dance to. Called "Zizou’s Waltz," it was originally written for Zizou, the lizard.

The mother-daughter writing team continues their work. There are two more books expected in the LIONBOY trilogy. When asked if they still tell Charlie’s story at bedtime, Louisa reminds us that Isabel is now 11. Bedtime nowadays is a rather more grown-up affair involving large novels and Eminem CDs. Here’s hoping the voices of audiobook narrators like Simon Jones continue to share airtime with the likes of Eminem.—Kirsten Cappy