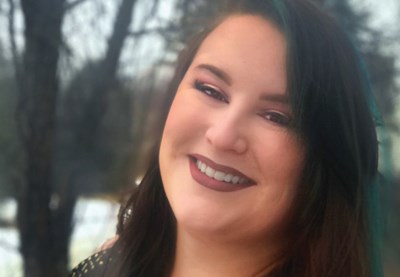 “If you love the books you’re doing, the work you’re reading, the product comes out better." 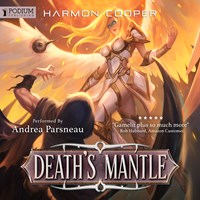 Narrator and voice actor Andrea Parsneau laughs when asked about her Twitter handle.

“I was always “Mouthy Maven”! That’s been my handle for any online game. I’ve always been a chatterbox, a well-intentioned know-it-all.”

Praised for her ability to portray a diverse cast of characters while conveying emotional nuance and humor, Andrea readily agrees that her background as a gamer has enriched her ability to imagine a diverse world, and to remain in character--skills vital to her work.

Still, her path to becoming an audiobook narrator was indirect. A graphic designer and fulfillment manager, Andrea woke up in 2012 and found she couldn’t walk. “A childhood back injury compounded by bad work habits had essentially caused my spine to shut down. I eventually improved after lots of time and physical therapy.” She began attending college, where she fell in love with voice acting, and where she met fantasy author William D. Arand, who encouraged her to try audiobook narration. Those first demos showed promise--but had terrible sound quality. So she took the plunge and invested in high-quality production tools and her own sound booth.

When Andrea began auditioning for projects, she encountered another challenge. Traditional offerings for those of her gender and voice type seemed limited to narrating erotica, nonfiction, and romance. “All great and profitable projects-- but I had trouble connecting with those stories.” She was drawn to fantasy, adventure, action, sci-fi. “Of course I wanted to narrate Gamelit and LitRPG--literary role-playing games.” But she hadn’t considered how many male characters these books featured. Determined not to be shut out from roles in worlds she knew and loved, she began applying anyway. “I’m stubborn. I had to accept that they weren’t looking for me initially. But I wanted to prove that they actually were looking for me-- they just didn’t know it yet!”

Her determination to seek out projects that called to her grew along with her confidence.

A recent example? DEATH’S MANTLE, for which she won an Earphones Award. “I absolutely adored narrating that-- the story dealt with addiction. It was a story close to my heart. It resonated deeply with me, the story of a character having to watch their own funeral as family mourns their death . . . the descent into addiction. So poignant and beautiful. It remains a favorite to this day.”

“If you love the books you’re doing,” Andrea adds, “the work you’re reading, the product comes out better. I recognize that’s a privileged position, but I still believe it is a positive self-fulfilling cycle. The more you do what you truly love and connect with, the more of that will come your way.”--Jessie C. Grearson