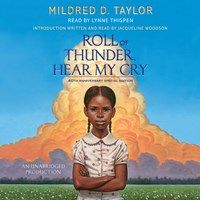 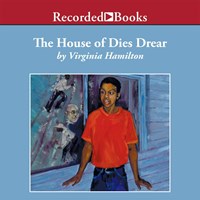 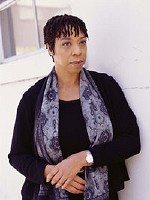 December 2003:  Lynne's strong voice can still be heard through the legacy of her audiobooks--especially in titles by Toni Morrison, Mildred Taylor, and Maya Angelou--but her untimely death in March 2003 is a great loss for listeners and admirers of her work.

Lynne Thigpen started at the top in audiobooks. Her first recording was Toni Morrison's JAZZ . "It was very hard," Lynne recalls, and she wondered if this type of acting work was really for her. "The half-page sentences and parenthetical phrases were like verbal jazz, like riffing." But the pleasures of this highly focused work won Lynne's attention. Her audiobook accomplishments chronicle the literature of the best African-American writers, Morrison, Maja Angelou, Mildred Taylor, Virginia Hamilton, Ernest J. Gaines, and Zora Neale Hurston. Lynne's theater credits cover everything from Broadway stage to major motion pictures and numerous awards--a Tony Award for Wendy Wasserstein's AN AMERICAN DAUGHTER, an L.A. Drama Critics Award for FENCES with James Earl Jones, Emmy nominations, movies, TV drama, including the current series, "The District." And children will recognize her from "Where in the World Is Carmen Sandiego?" She is generous with her abilities, and her dedication to audiobooks is an inspiration to other narrators at the Recorded Books studios. Also, she's frequently a part of programs at libraries and schools, bringing the joys of audiobooks to a diverse audience.

Lynne shared some details of her preparation for a recording. After reading the entire book, she isolates the 50-60 pages she'll record in each three-hour session. She distinguishes the different characters with colored markers and marks the text for breath control--something essential in a complex piece like JAZZ . She also notes any pronunciations, regionalisms, or references, and reviews each one with the engineer who'll work with her in the recording session. Beyond the practicalities, Lynne compares each text to "sheet music." She sees her narration as an opportunity to set the sounds of the words free so that "they can sing in the ear of the listener." Lynne's keen sense of the musicality of speech and dialogue is one of the great gifts she shares with listeners. She also points out that the absence of the actor's visual presence is one of the things that makes the audiobook experience so intimate--there's just the voice and the story.--[December 2000]

December 2002:  The success of the CBS crime drama "The District"  kept Lynne on the air but out of the audiobook studios. However, we enjoyed Lynne's narrative skills on the rerelease of Toni Morrison's SULA .

December 2001:  In her second season of the CBS series "The District" Lynne had time for just a couple audiobooks this year. Her recording of SULA by Toni Morrison, adds to Lynne's nearly complete audiography of Morrison's work. Of special interest this year is Lynne's reading of Mildred Taylor's ROLL OF THUNDER, HEAR MY CRY on the twenty-fifth anniversary of the book's publication.