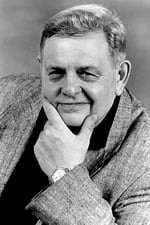 Patrick Tull's rich, rumbling bass and British accent were the perfect match for the high seas adventures of Patrick O'Brian, and his mastery of every rare word and obscure nautical term was legendary. His irascible style was similarly well suited for Colin Dexter's Inspector Morse, John Mortimer's Rumpole, and Ellis Peters's Brother Cadfael. Patrick was honored as one of AudioFile's Voices of the Century in 2000 and celebrated with five Earphones Awards. Kathleen Gormley was his director for most of the last 10 years:

Like most performers, Patrick Tull loved being on stage, the center of attention, and he reveled in narrating books because it was like doing a one-man show. Each book was a new production.

When he flubbed a line or thought he could make better sense of something he had read, he would ask to do it over... but when he had, it was written in stone and he was proud of every syllable. And, according to Patrick, he was pretty much always right. I came to realize early in our association that he loved to turn every mispronunciation into a confrontation. When I thought I'd heard something fishy, I'd stop him and look up the word in the Oxford Dictionary. While I searched for the word, he would keep insisting that his pronunciation was acceptable. He loved making a big deal of it. If his pronunciation was listed, I would never hear the end of it. He'd keep a record of each do-over and who was right, and at the end of the session, he'd tally the two columns and insist he was gaining on me. He would tell me I was losing my edge. If I pointed out that I was right four times to his one, he would insist that it was temporary. Yet, he was thoroughly professional and courteous. He always finished his assigned books before the deadline, and he always thanked me for working with him.

With the death of Patrick O'Brian, the Aubrey-Maturin series came to a halt, and Patrick, like all of O'Brian's fans, was crushed. It was as if he'd lost two good friends in the Captain and the Doctor. He mourned them as if they had been flesh and blood.

He turned his eye on the classics again, and the last time I saw him--when we recorded a new edition of THE JUNGLE BOOK--he told me he would love to read LORNA DOONE. But he never had the chance. At his memorial service at the Church of the Transfiguration in New York City, the "actors' church," we all agreed that Patrick would have loved being there: It was a full house, and it was all about him.--Kathleen Gormley