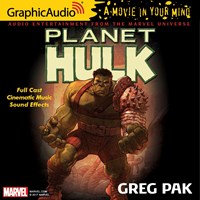 As a voice professional, Audie winner Rick Rohan has had a solid career reading fiction and nonfiction. You can hear his work on a group of American president titles he did for Audio Renaissance, an acclaimed space fantasy series called Deathstalker, and a number of well-received audiobooks on finance, spirituality, and management. Since the mid-1990s he's also been a full-time audio producer and director at The Cutting Corporation, which produces audios for others as well as for its own imprint, GraphicAudio. There, he will take a narrating role if he thinks he's right for the book. Cutting executive Anji Cornette calls his voice work "high impact." But as editor and producer, Rick says, "I have to kind of remove myself from a production once I perform it."

Rick's background is acting, but he hasn't been on stage for 10 years. He occasionally goes to shows to see if the hunger is still there. "There's a little bit of it there, but I get a lot of the same gratification from doing this kind of work that I would by being onstage." After returning to the DC area from the obligatory acting quest in New York, Rick turned to audio narration and became a bit of a perfectionist reading almost 170 titles for the Library of Congress. The technology used there made playback and editing difficult, so he had to get it right the first time. The titles he produces or directs at Cutting are also constructed more at the microphone than in the editing room. "By and large, a production has its shape already when it gets to the editor."

Rick remains attached to the art of narrating. "I'm always exploring vocal variety—variety in shaping things. If you fall into a rhythm that's consistently predictable, it works against the listener paying attention to what you have to say." He adds that fictional titles require more homework than his nonfiction projects. "A novel requires more planning and preparation—understanding the characters and events well enough to 'cast' it in my mind and have the confidence to indulge in some creative experimentation. I really need to know where the story is going and where the surprises are."

The challenge with personal development titles, Rick says, besides being sensitive to the author's mission, is to read with a relaxed kind of energy without sacrificing other elements of the recording. "I've found that if I get more quiet and relaxed—more conversational sounding—it makes it a little harder to have clean diction."

But hearing Rick's work on such titles as CELEBRATION OF DISCIPLINE or NOW, DISCOVER YOUR STRENGTHS, listeners get elocution that is both perfect and relaxed. They also enjoy subtle voice-personality adaptations that sound effortless but are precisely matched to each author's mission and point of view. With nonfiction in general, Rick says, "I've developed a kind of friendly, authoritative, confident version of me that I automatically fall into as a starting point, and then see where the author's tone leads me."--Thomas Walken