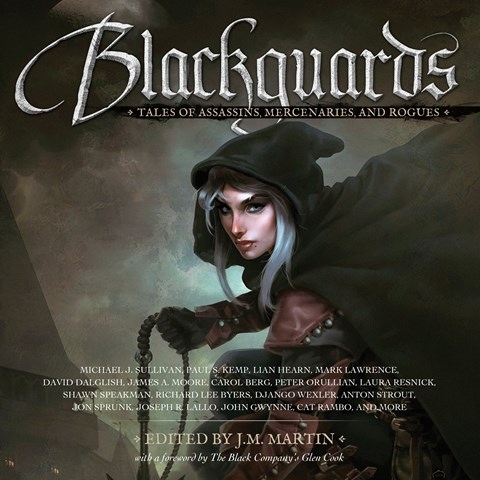 This story collection truly has something for everyone who loves the fantasy genre, especially as enhanced by some of the best voices in the business. Allison Johnson takes center stage in "Mainon," about a female assassin who is hired to protect a nobleman who had a vision of his own death prior to his wedding night. Johnson's mature, warm tones work well for both male and female voices. The tone she gives Mainon is gruff and no-nonsense; whereas, the nobility sound softer and more unctuous. This contrast effectively portrays the divide between the two classes. Author Jean Rabe gives several indications in her text about what her characters are supposed to sound like, which Johnson pays close attention to. Narrator Lauren Fortgang works her vocal magic in "Irindai," which takes place amid the hot sands of Arabia. She breathes life into the characters, giving them Middle Eastern accents when called for but keeping her main character's voice clear and unadorned. The plot weaves an enchanted tapestry of gods and thieves--and the listener will never think of moths the same way again. In "Seeds," narrator MacLeod Andrews's low tones effectively bring forth the desperation of a mercenary who finds himself in trouble with the law. Andrews comes across at first as cocksure and sarcastic, but later he illuminates the deep sincerity of the soldier, allowing the listener to see the hero's heart behind the bravado. The uniform voice of Victor Bevine introduces each of the stories--sounding every bit the rogue with his gravelly timbre and tying together the wide range of worlds and narrators in this lengthy production. E.E. © AudioFile 2017, Portland, Maine [Published: JUNE 2017]